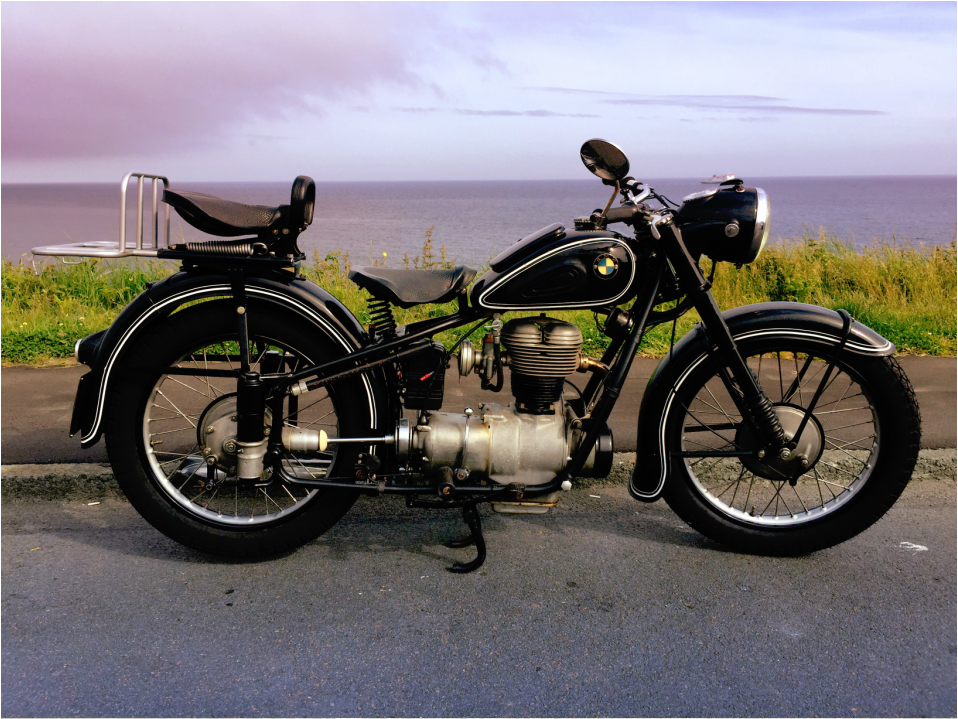 With demand for cheap, reliable transport booming in post-war Europe, BMW's single-cylinder motorcycles sold in unprecedented numbers, forging the Bavarian company's reputation as a maker of high quality two wheeled machines. The R25 came along in 1950, a new welded tubular steel frame with sidecar mounts was adopted, along with plunger rear suspension and an improved engine. Notice the small rubber gaiters above the front axle and the tool box on top of the tank.

The R25, built by BMW, has only been in production for one year, between 1950 and 1951. It was equipped with a four-stroke two-cylinder flat-twin engine able to reach a top speed of 95 km/h.

The longitudinally mounted single-cylinder four-stroke engine has a lateral camshaft and running outside next to the cast iron cylinder in chrome-plated steel tubing bumpers. This actuate the rocker arm in cast aluminum cylinder head, which in turn hanging valves actuate (OHV). The rocker arms are mounted as the piston pin in bronze bushings. The camshaft is driven by a simple chain from the crankshaft. The oil pump is a gear pump in the oil pan, and is driven via a worm gear (reduction) of the camshaft.

On the front tailshaft sit behind the sheet steel cover, the splash-proof encapsulated DC-alternator and the charge controller for lead acid battery . The heavy flywheel (with - viewable in the inspection hole - ignition marking) on the rear tail shaft absorbs the single dry. The clutch is operated by means of a thrust bearing and a plane passing through the hollow main shaft push rod. The carburetor is a 22-er Bing carburetor float chamber (Model: 1/22/28) with a conical needle in a round slide. The wet air filter is located directly on the carburetor. The suction filter is a steel net, which is wetted with oil, where the dust settles. It provides a rough filtering of the intake air. The air filter is not changed for maintenance, but cleaned with gasoline and newly wetted with oil

I bought this bike from an old boy who had about 20 BMWs. He was an engineer by trade, and I bought this bike, because I wanted a small single and I really liked the lever starter. It was only after working on the bike, and riding it that I realised just how well restored and sorted this bike is. It's typically German; well designed, well built and very reliable.

I just love riding this bike, it's easy to start and idles well.

Another huge benefit with these bikes is there is a specialist based in London, and parts are readily available.

Although not my actual bike, it's such a good photo that I thought it was worthy of reproduction.