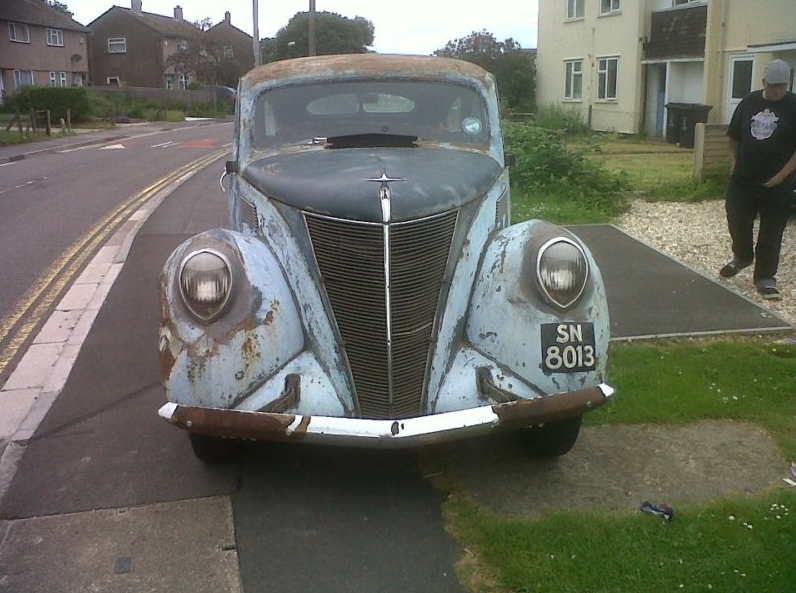 In 1936 Lincoln introduced the Zephyr, named and styled after the streamlined Burlington Zephyr express train. The train was an aerodynamic diesel powered streamliner that brought an end to the steam-engined trains and set many new speed-records.

The Lincoln Zephyr was first introduced to the public at the New York Auto Show in 1936. Its elegant Art Deco styling and teardrop configuration was a highlight of the show. The front teardrop style gave the impression of the car in motion, even at a stand-still. The rear fenders were nearly enclosed which aided in the vehicles aerodynamics. The teardrop style was applied to many aspects of the vehicle, including the front and rear fenders, grill emblem, and lights.

The Lincoln Zephyr pioneered unitised construction and was the first Ford product to have an all-steel roof design. The Zephyr models were fitted with front and rear transverse leaf springs and a V12 engine that displaced 267 cubic-inches and produced 110. The V12 engine was based on the existing V8 Ford architecture and benefited from the 'lessons learned' over the years. The Zephyr models were available as a four-door fastback sedan or as a two-door sedan coupe. For 1937, a three-passenger coupe and the limited production Town Limousine were added to the line-up. For 1936, nearly 15,000 examples of the Zephyr were produced and accounted for over 90 percent of Lincoln's total production. The 1937 models were mostly unchanged and production nearly doubled, with nearly 30,000 examples produced.

Amazingly, in the thirties Lincoln supplied RHD cars into Europe. This car is one of those cars and is therefore super-rare.

This is a car to be enjoyed, because not only do you not have to worry where you park it, but it’s fitted with a modern V8 engine so will drive anywhere and keep up with modern traffic.

The ‘rat’ look isn’t to everyone’s tastes, but it’s certainly to mine. You either get it or you don’t!

The interior was completely original and I was going to keep it that way, but moths, mice and the occasional girlfriend had divided opinions on its usability. Therefore in 2013, the interior was re-done. The Red leather is in fact ‘Dunhill’. I bought a bulk of leather from Dunhill in the trade. This leather was ear-marked for handbags, but a shading imperfection meant that many tens of handbags lost out to a very unique one-off automobile.

The car might look like it needs lots of work, but mechanically it’s sorted and I have gone though the running gear and carried out a complete brake overhaul.

This car has been extensively rust-proofed, so it shouldn’t need to ever make friends with a welding gun this side of the next millennium.