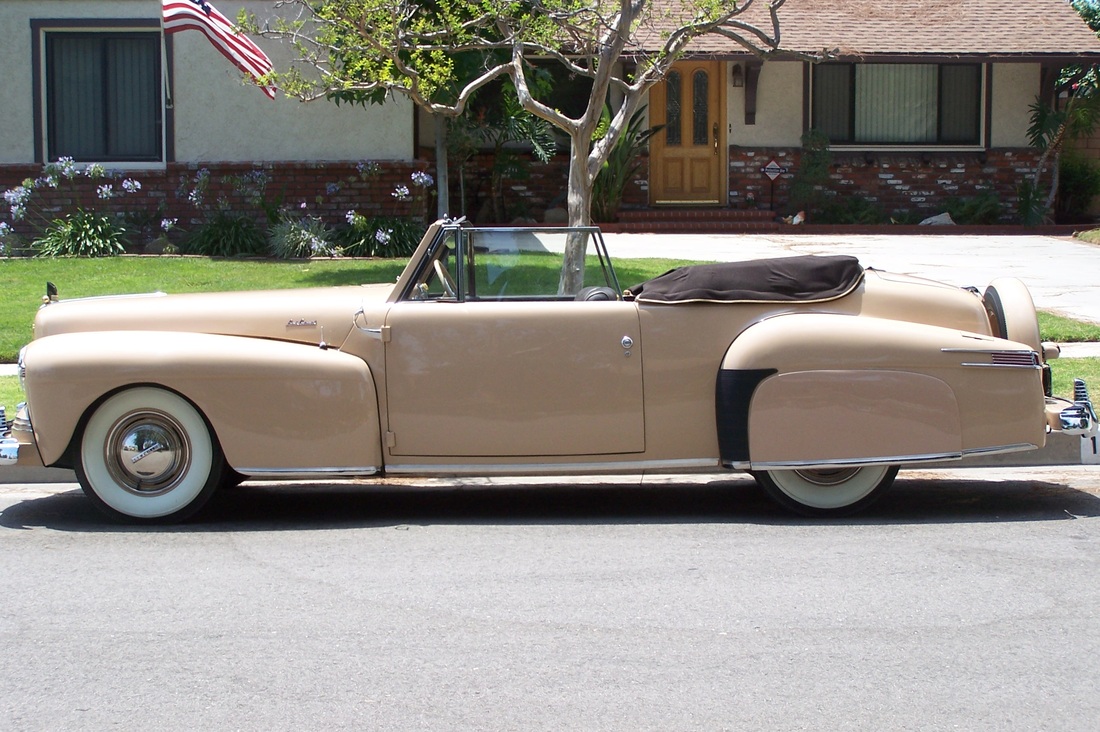 After returning from a trip to Europe in 1938, Edsel Ford went to the Ford Company's head designer (his good friend Bob Gregorie) and asked him to build a 'strictly continental' car for his personal use. Starting with the chassis of the existing Lincoln Zephyr, Gregorie moved the driver's seat back, elongated the hood and front fenders, lowered the roof by three inches, and sectioned and lowered the cowl four inches to match the hood. Edsel was pleased with the results and construction of the car began. Once finished, the car was shipped to Florida where Edsel drove it around Palm Beach. Within weeks Edsel wired Gregorie, explaining that he could have filled his pockets with pre-orders from his wealthy friends and neighbours. Production quickly proceeded.

Edsel Ford was the only son of Henry Ford, but the two men could not have been more different. Edsel Ford was worldly, gifted with fine taste and a patron of the arts – including his many personally funded commissions that helped American coach-builders survive the early years of the Great Depression. It is an irony then that the automobile created to be a tribute to Edsel Ford instead became an embarrassment when it was introduced 14 years after Edsel’s early death in 1943, at the age of 49. In his highly productive lifetime, Edsel Ford become president of Ford Motor Company and encouraged Ford’s purchase of the Lincoln Motor Company from the founding Lelands. He persuaded his father to discontinue production of the Model T – the most successful car in the world at the time – and he led the development of the stylish Model A that was sometimes referred to as ‘a little Lincoln’. He also created the first styling department at Ford in 1935, hiring E.T. ‘Bob’ Gregorie as styling director.

The idea of for the Lincoln Continental came directly from Edsel Ford’s worldly view. The story has been told many times that the younger Ford returned from a European trip struck with the coachwork he observed travelling on the Continent. Ford tasked Bob Gregorie to create a custom coach-built automobile on a Lincoln Zephyr chassis with the clean, unadorned lines and minimal chrome trim of the European cars he admired. The first Lincoln Continental prototype was shipped to Florida in March 1939, where Edsel Ford and his family wintered at Hobe Sound near Palm Beach. Edsel Ford’s Continental-style Lincoln was greeted with rave reviews and questions about production from just the crowd he hoped to attract. A second prototype was constructed for refinement and the Lincoln Continental went into production just six months later in October 1939 as a 1940 model.

Like the first prototype, the Continental was constructed with the same 125- inch chassis as the Lincoln Zephyr. The engine in the first production Continental was a 292 c.i. flathead V-12 producing 120 horsepower, with a three-speed column shifter. The body was all new. In comparison with the Zephyr, the driver’s seat was moved back, the hood was longer and both the roof and the side profile of the car were dramatically lowered. The Cabriolet, like the prototypes, had closed rear roof quarters that visually stretched the length of the car together with the spare tire mounted at the rear of the car. Interior trim featured a gold colored finish. The extensively revised 1942 Lincoln Continental shared the Zephyr’s new styling format that was distinguished by a lower ride height and squared off fenders as well as the Zephyr’s wider, two-piece grille. Engine size increased to 306 c.i. with 130 horsepower. Like all of the industry, 1942 Lincoln production was cut short for the war effort and a total of only 1,236 1942 Lincolns were produced including just 136 Cabriolets.

This automobile is one of only a few 1942 Lincoln Continental Cabriolets that are thought to survive. The subject of an older ground up restoration, the car presents beautifully today. Finished in Chetwyn Beige, with a tan leather interior and a dark tan top, the condition of the leather is very good showing only very slight signs of use on the driver’s side. The paint quality is very good, with nice panel fit and finish. The fully restored dashboard is pure 1940s glamour that gleams an elegant compliment to both the exterior and the interior. Being a very prestigious car in its day, it is well-equipped with a radio, heater, power vacuum windows, power operated convertible top, clock, and full instrumentation. The wheels are finished with correct chrome hubcaps and trim rings that are in very good condition and the polished chrome trim on the exterior is also in very good condition.

The flathead V12 engine looks impressive and is very well detailed in the engine bay. This engine was never intended to make big power, but rather, it was highly regarded for its smoothness in operation. Quiet, silky and with a broad, flat torque curve, it provides effortless operation whether tooling around town or touring long distances on main roads. A three speed manual transmission feeds power to a standard Columbia 2-speed overdrive rear axle. The car drives smoothly and almost silently, seeming to practically float over the road in comparison with its pre-war contemporaries.

The 1942 Lincoln Continental was in production for only a few months due to the outbreak of World War Two,  which resulted in a shutdown of the U.S. auto industry. The 1942 Continental's front end design was a major design departure from the 1940-41 models. With only 136 Cabriolets produced in 1942, this was the lowest production of Continentals of the early 1940s era. It is estimated that as few as 10 or 12 survive today.

Don’t let the V12 frighten you, it’s very simple and indestructible. This is the second of these cars that I have owned and this one runs like the proverbial Swiss clock. It starts easily, even though it’s 6-volt. To drive, you only have 3 gears to worry about, and gear-change is smooth and easy.

The car has obviously undergone a major restoration at some point, but when I bought the car it didn’t come with much history. I have used this car a lot and all the brakes and engine etc have been sorted, and I haven’t had to do very much.  The underside has been treated and the various box sections including inside the doors have been injected with cavity wax.

Immediately prior to shipping the car from the USA I had the hood vacuum cylinders replaced with electric cylinders and therefore the hood goes up and down quite smoothly. The front windows are vacuum operated and function perfectly fine and therefore I have left these alone. The car is still on 6V and again it starts fine so I have left this alone. There is a 12V stored discreetly which is required for the hood, and is also handy for the cigarette lighter (USB) etc.

The club for these cars www.lzoc.org is probably the best car club that I have ever been a member off. The back-up, help and magazine are better than anything I have ever known.

Even though there were only 136 convertibles in 1942, absolutely everything I have ever needed has been available. I broke the quarter winder and back-plate – which are a special colour to match the paintwork, I remember being devastated and thinking that I would never find another. Two emails later, I had two on there way to me by airmail.

You also need to remember that the engine and running gear were used between 1942 and 1948 and therefore all the parts are plentiful, and surprisingly cheap. This car also comes with a load of spares that I have accumulated over the years.

Production in 1942 extended to only 136 cabriolets and 200 club coupes before production ceased making this a super-rare car even in Forties America. It was unquestionably exclusive, luxurious, hand-crafted automobile for the status conscious consumer. In my opinion, the 42 front grille, which is different to the later years is the nicest - under-stated, slick and graceful.

I have owned about 50 classic cars, but this any my 1937 Lincoln Zephyr Coupe are by far the best cars that I have owned in terms of looks and driving use. OK, neither car will win any land-speed records, but these are cars that you can use and enjoy.  The transmission is manual with '3 on the column' (3-speed column shift), which is a joy to use.

This car is certainly significant in size and presence, but mechanically it's so easy to keep on the road. You don't need any special tools for anything, and with a single carb it's even easy to tune-up. Anyone with a rudimentary knowledge of old cars will not struggle to maintain this car.

The early Continental was recognised by the Museum of Modern Art as one of eight automotive 'works of art' and by Time magazine as one of the top ten best-designed commercial industrial products of all time.

Finally, the car lives on the Isle of Man where it is registered, and therefore it will need re-registering, but remember no MOT is required if you are UK based.

​One of only 10 1942 Cabriolets thought to survive. The subject of an older restoration, the car presents beautifully in Chetwyn Beige, with a tan leather interior and a dark tan top. The paint quality is very good, with nice panel fit.  Being a very prestigious car in its day, it's well-equipped with a radio, heater, power vacuum windows, power operated convertible top. Don’t let the V12 frighten you, it’s very simple and indestructible and runs like the proverbial Swiss clock. To drive, you only have 3 gears to worry about and gear-change is smooth. Absolutely everything is available. I broke the quarter winder and back-plate – which are a special colour to match the paintwork, I remember being devastated and thinking that I would never find another. Two emails later, I had two. Remember the engine and running gear were used between 42 & 48 and therefore all the parts are plentiful and surprisingly cheap. I recently replaced the 3 brakes hoses and the master cylinder in under an hour!