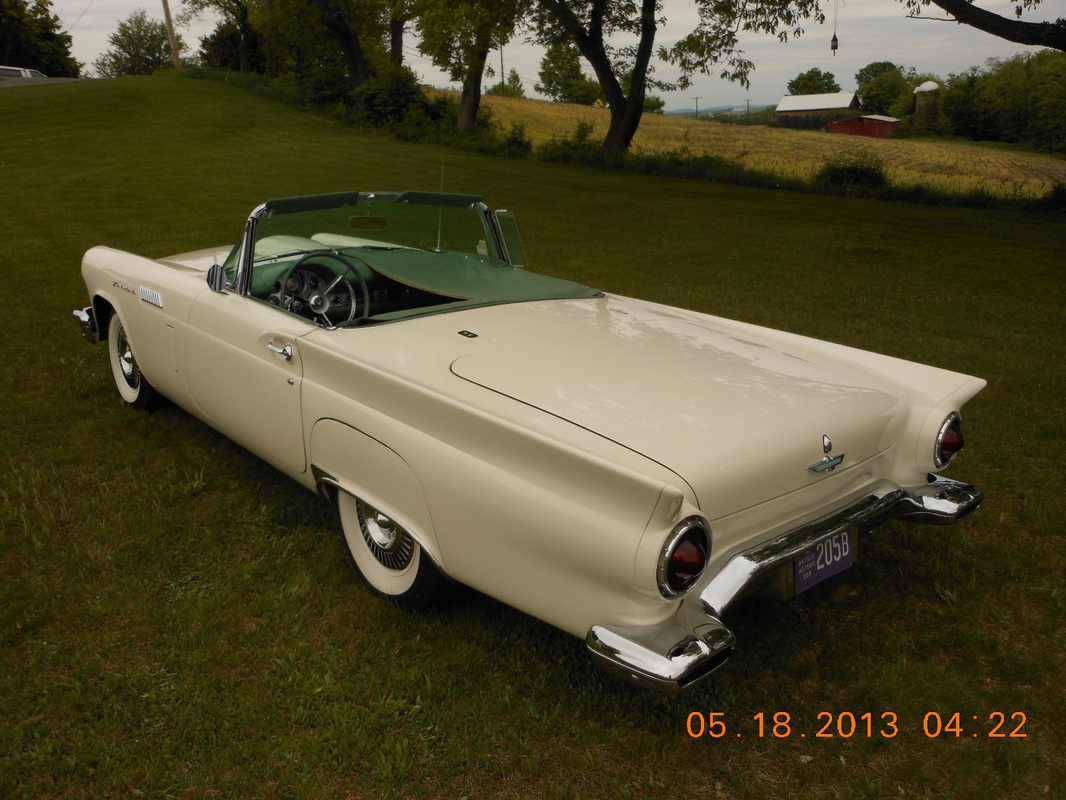 The Ford Thunderbird (‘T-Bird’) began life in February 1953 in direct response to Chevrolet's new sports car, the Corvette, which was publicly unveiled in prototype form just a month before. Under rapid development, the Thunderbird went from drawing board to prototype in about a year, being unveiled to the public at the Detroit Auto Show on 20th February 1954. It was manufactured by Ford in the United States over eleven model generations from 1955 through to 2005. The second to fourth generation Thunderbird convertibles were similar in design to the Lincoln convertible of the time and borrowed from earlier Ford hardtop/convertible designs. While these Thunderbird models had a true convertible soft top, the top was lowered to stow in the boot area, considerably reducing available boot space when the top was down. The overall appearance was a sleek look with no trace of a convertible top at all.
​
This 1957 Thunderbird can only be described as beautiful; a series three example which, importantly, is the last of the first model released and has the desirable porthole hardtop along with the contrasting soft top. Imported into the UK in November 2012, the car obviously saw little or no rain in its former life and has been used sparingly since its UK registration. The 5113cc, V8 engine performs well and sounds exquisite and 699 YUN is finished in gleaming white with contrasting red leather interior. Oceans of chromework and overall excellent condition make this a stunning looking T-Bird and the car is supplied to auction with a V5C registration document. Thunderbirds as good as this are hard to find, there are very few driving experiences that can compete.

According to the original "build sheet" or factory invoice included; this Thunderbird was delivered to Gerclick Motors of Omaha, NE in March 1957.  The documentation with the car says the car spent its life to the mid eighties in the inland town of Upland, CA.  The significance of CA. based cars; besides the case of disassembly, is the pronounced lack of RUST in the sheet metal, chassis, and mechanicals.  Note the smoothness in the chassis surfaces etc. shown in the pictures.  I further state that I have seen NO evidence on any panel replacement or even accident damage.  Please look at ALL 20+ pictures, no surprises here.

It underwent a full "body off" restoration in 1982/83 and was sold to a PA. gentlemen who consigned it to the Gast Museum.  It was featured prominently on a rotating turntable at the entrance.  We had sold our Black//White F code 57 and were searching for a replacement that was: Willow Green, rust free and an older restoration.  We purchased the car in 1997, 16 years ago.

Like many restorations this one had its share of issues along the way.  The body and chassis had been painted by one shop and the hardtop by another after some disagreement.  The aluminum valve covers; for example, had been ruined by rounding off all the edges!  I restored the current set.  Similarly the hard top hold down latches had been disassembled and beautifully re-chromed, BUT reassembled with lefts/rights, fronts/sides, handles and latches mixed up.  The RH exhaust manifold had the wrong casting number.  I replaced it with a correct one.  There were a number of such minor things; wrong bolt here, incorrect clamps there, imperfect air cleaner lid, decals instead of correct yellow stamps, poor quality reproduction emblems etc..  All have been replaced with NOS (new old stock) parts.  The dashboard had a new cover but the remainder was unrestored.  I restored it totally; including purchases from 3 vendors of the engine turned dash/door panels to get one complete set with the engine turnings in the same direction (CW).  OK, so I have been called obsessive.  The panel turnings will reflect the light differently across the dash if mismatched.  I spent 6 months and several thousand dollars making this restoration as complete and authentic as I could then.

There were few 57 Thunderbirds built using the Willow Green color.  Of those few most were either Willow Green body and hard top or Willow Green body and White hard top.  Least in production I believe was this combination of a White body and Green hardtop.  Maybe a hundred or less?  I don't ever recall seeing another one. Almost all had the two tone green interior here.

Invoice includes green hard top.  ‘Fordomatic’ transmission, Power brakes and steering, whitewall tires, full wheel covers and also RARE optional "built in" Tonneau cover.  ALL the glass is FoMoCO logo and tinted except for the windshields which are correct tinted PPG.  I added the power windows and the 4 way power seat options; along with a white soft top.  NOS seat belts were added for safety.  Engine is the most popular 245 HP, 312 CID or D code version.

True miles are unknown.  The speedometer showed 52000.  I rebuilt it with the dash and reset the odometer to zero.  I don't doubt the miles; and I would say it probably hasn't been driven 1500 miles since 1983.  I have continued to maintain and upgrade.  A new radiator, steering box rebuilt, power steering cylinder notably.  In an attempt to use the car more; I recently re-did the entire exhaust and brake systems, along with Coker Tires and fresh battery.  It didn't work.  We STILL don't get the car out, its time to sell.  It starts, runs, drives like a top and always has.  There are no concerns here for roadworthiness or safety.

What is not working?  The original Town and Country Radio is clean as a whistle with mint chrome knobs and dial.  It doesn't WORK and never has.  We never use it anyway; preferring our spoken/unspoken memories of 50 years in these cars.  Babies, graduations, weddings, club events et al.

After 30 years; the paint has a few small cracks or beginnings of same (not big blisters or broken out bits) at a few panel joints.  These welded joints were filled and smoothed with lead at the factory; its not uncommon to see the effects of the lead moving or still reacting under the paint many years later.  They don't show in the pictures.  Don't mean to make an issue of this.  They could easily be spotted by a competent painter.  And white is arguably the easiest colour to blend.  Nobody notices but I am a perfectionist.

One of the huge benefits of owning a Thunderbird is the parts supply. Not only can you buy literally everything for this car off the shelf, but there are several suppliers which means that the prices are low. For example, a complete new distributor is less than £50!

This link will help: http://www.ctci.org/suppliers.php


History
The Ford Thunderbird began life in February 1953 in direct response to Chevrolet's new sports car, the Corvette, which was publicly unveiled in prototype form just a month before. Under rapid development, the Thunderbird went from idea to prototype in about a year, being unveiled to the public at the Detroit Auto Show on February 20, 1954. Like the Corvette, the Thunderbird had a two-seat coupe/convertible layout. Production of the Thunderbird began later on in 1954 on September 9 with the car beginning sales as a 1955 model on October 22, 1954. Though sharing some design characteristics with other Fords of the time, such as single, circular headlamps and tail lamps and modest tailfins, the Thunderbird was sleeker and more athletic in shape, and had features like a faux hood scoop and a 150 mph (240 km/h) speedometer hinting a higher performance nature that other Fords didn't possess. Mechanically though, the Thunderbird could trace its roots to other mainstream Fords. The Thunderbird's 102.0 inches (2,591 mm) wheelbase frame was mostly a shortened version of that used in other Fords while the car's standard 292 cu in (4.8 L) Y-block V8 came from Ford's Mercury division.

Though inspired by, and positioned directly against, the Corvette, Ford billed the Thunderbird as a personal luxury car, putting a greater emphasis on the car's comfort and convenience features rather than its inherent sportiness. Designations aside, the Thunderbird sold exceptionally well in its first year. In fact, the Thunderbird outsold the Corvette by more than 23-to-one for 1955 with 16,155 Thunderbirds sold against 700 Corvettes.[5] With the Thunderbird considered a success, few changes were made to the car for 1956. The most notable change was moving the spare tire to a continental-style rear bumper in order to make more storage room in the trunk, and an optional porthole in the removable roof was offered and often selected by buyers. However, the addition of the weight at the rear caused steering issues. The spare was moved back to the trunk in 1957 when the trunk was restyled and made slightly larger. Among the few other changes were new paint colors, the addition of circular porthole windows as standard in the fiberglass roof to improve rearward visibility, and a 312 cu in (5.1 L) Y-block V8 making 215 horsepower (160 kW) when mated to a 3-speed manual transmission or 225 horsepower (168 kW) when mated to a Ford-O-Matic 2-speed automatic transmission; this transmission featured a "low gear", which was accessible only via the gear selector. When in "Drive", it was a 2-speed automatic transmission (similar to Chevrolet's Powerglide).

The Thunderbird was revised for 1957 with a reshaped front bumper, a larger grille and tailfins, and larger tail lamps. The 312 cu in (5.1 L) V8 became the Thunderbird's standard engine, and now produced 245 horsepower (183 kW). Other, even more powerful versions of the 312 cu in (5.1 L) V8 were available including one with two four-barrel Holley carburretors and another with a Paxton supercharger delivering 300 horsepower (220 kW). Though Ford was pleased to see sales of the Thunderbird rise to a record-breaking 21,380 units for 1957, company executives felt the car could do even better, leading to a substantial redesign of the car for 1958.

This is an iconic and powerful sports car that does everything that Italian exotics do but at a fraction of the price - I know, I've owned both. Things don't fall off, you won't need a trickle charger, a cambelt change every three days, or a bloke with a B.Sc. to change the plugs, but you do get that awesome V8 burble and unbelievable torque. It's harder, and probably more expensive to gets parts for your BMW Z4 - there is literally nothing you can't get for these cars from numerous dealers. 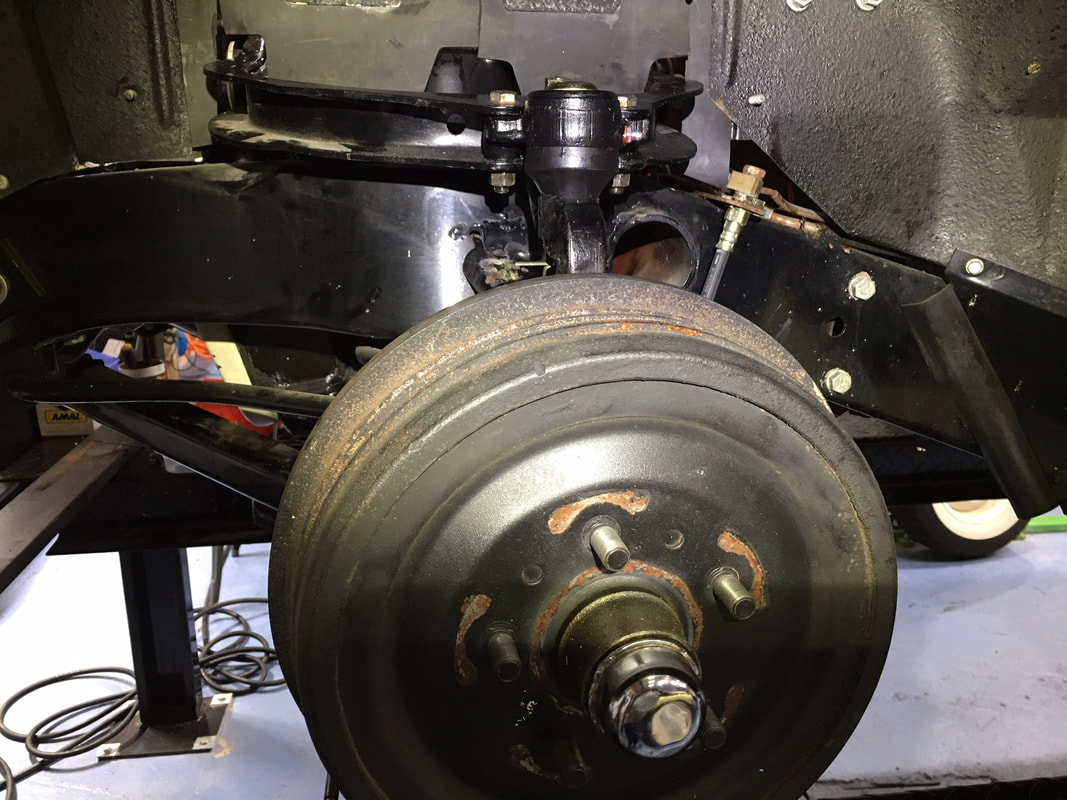 The waxoyl here is escaping the drain holes that are factory original. I used an airline to blow out all dust and debris before the wax injection.