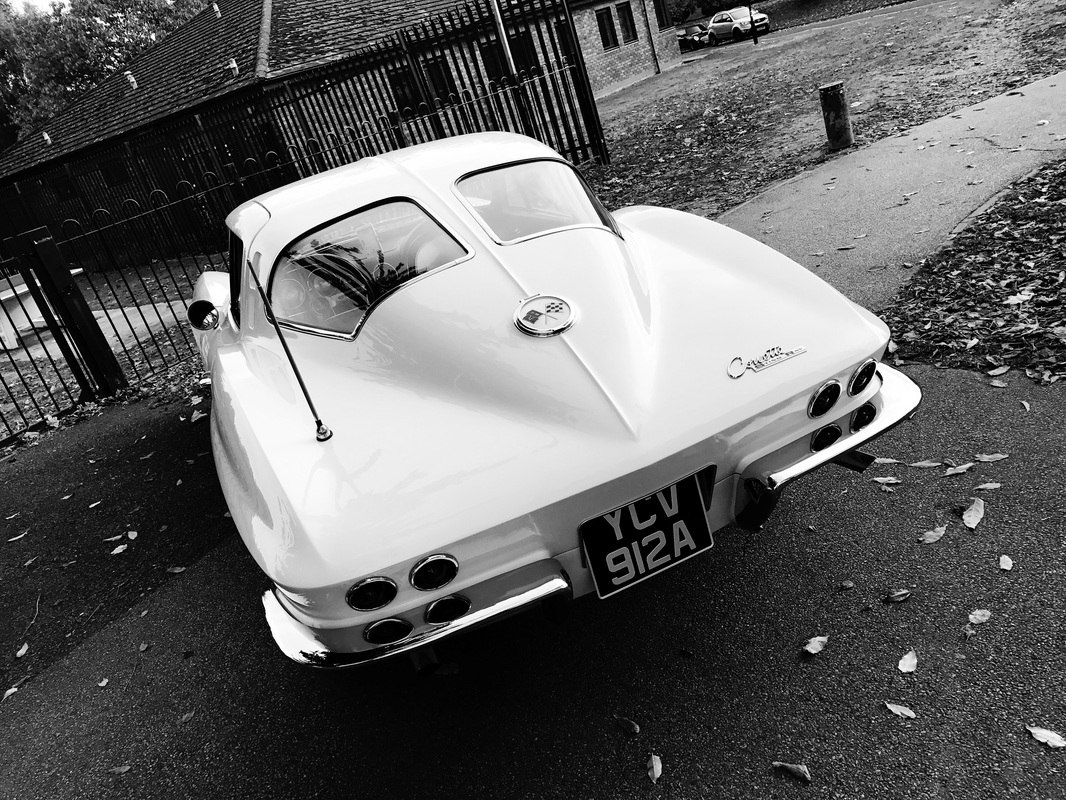 Every now and then a car comes along that changes all the rules and takes design to the next level. Penned by GM stylist Larry Shinoda under the guise of Bill Mitchell, the ’63 Sting Ray introduced all-new wind tunnel–influenced (a first for Chevrolet) aerodynamic styling and superb engineering, immediately elevating the status of the car.

A coupe was available for the first time, offering a body structure 90 percent stiffer than the previous year’s roadster. Known for its distinctive split rear window, unique only to 1963, this was the first Corvette with an independent rear suspension and wind tunnel–designed aerodynamics. Zora Arkus-Duntov, known as the father of the Corvette, was quoted as having said of the 1963 Corvette, “For the first time I now have a Corvette I can be proud to drive in Europe.”

The 1963 Corvette Sting Ray not only had a radically new design, but also newfound handling prowess. The Sting Ray was also a somewhat lighter Corvette, so acceleration improved despite unchanged horsepower. For the 1963 model year, 21,513 units would be built, which was up 50 percent from the record-setting 1962 version. Production was divided almost evenly between the convertible and the new coupe - 10,919 and 10,594, respectively - and more than half the convertibles were ordered with the optional lift-off hardtop.

Equipment installations for 1963 began reflecting the market's demand for more civility in sporting cars. - the power brake option went into 15 percent of production, power steering into 12 percent. On the other hand, only 278 buyers specified the $421.80 air conditioning; leather upholstery - a mere $80.70 - was ordered on only 1,114 cars. The cast aluminium knock-off wheels, manufactured for Chevy by Kelsey-Hayes, cost $322.80 a set, but few buyers checked off that option. However, almost 18,000 Sting Rays left St. Louis with the four-speed manual gearbox - better than four out of every five. Therefore if you consider that this 1963 example has the Powerglide (20%), power brakes (15%), power steering (12%) and power windows this vehicle with it’s colour combination may be unique. Interestingly Silver was the most popular colour.

All 1963 cars had 327cid engines, which made 250 hp standard, with optional variants that made 300 hp, 340 hp and 360 hp. The most powerful engine was the Rochester fuel injected engine. Options available on the C2 included AM-FM radio (mid 1963), air conditioning, and leather upholstery. Also available for the first time ever on a Corvette was a special performance equipment package the RPO Z-06, for $1,818.45. These Corvettes came to be known as the "Big Tanks" because the package initially had a 36.5-US-gallon (138 l; 30.4 imp gal) gas tank versus the standard 20-gallon for races such as Sebring and Daytona. At first, the package was only available on coupes because the oversized tank would not fit in the convertible.

If like me, you considered a Fuelie, I would strongly recommend you do your homework. In the UK, with our Ethanol fuel you are unlikely to get one of these cars to run anything like useable.

This is a rare opportunity to own a great example of an older restored 1963 Chevrolet Corvette Sting Ray legendary 'Split Window' coupe in very fine condition throughout! This is one highly desirable and collectible un-abused example of one of the best styling efforts of any decade, a genuine grand touring car and one of America's best loved classic cars ever, this shortest lived Corvette design (1963-67) is probably the most sought after models and the one year only (1963) Split Window coupe is surely one of the 'must have' cars for any serious car collector or enthusiast!

Underneath that gorgeous body was a serious car mechanically, and it was the first use of the Sting Ray name to describe the car. The fiberglass car rode on a four-inch shorter wheelbase than previous models, but overall length remained nearly the same. For ’63, the Sting Ray featured aggressive yet handsome hidden headlights. A new ladder-type frame replaced the X-type frame, which lowered the centre of gravity while also improving handling.

The second generation, C2 Corvette, aka know as the Corvette Sting Ray was produced between 1963-7. Like all previous Corvettes, the Sting Ray had a body made from a number of fiberglass panels mounted on a traditional separate frame but the body and chassis were completely redesigned and for the first time a coupe body was available. A centre wind split on the coupe roof flowed through the rear glass window creating the now legendary and highly collectible 1963 one year only 'Split-Window' coupe!

This example is resplendent in crisp Ermine White over a rare optioned Saddle tan interior, this Corvette is also equipped with the Powerglide automatic transmission that makes for effortless cruising. In addition, it features the highly desirable power brakes, power steering and power windows – all these ingredients make what is already a rare car super rare.

I had seen a lot of Corvettes before I bought this one including a trip Stateside, but I found this car in the UK and was persuaded by its options, originality and panel fit.

The engine bay is very nicely detailed and has the correct air cleaner and all ignition shielding. The only thing not correct it has 340hp valve covers as previous owner preferred the look.

I have documentation to support this matching numbers car. Not only is the drive train (300hp 327 V8 engine) original, but pretty much everything else is original with the correct numbers and date code from the Carter AFB carb, intake manifold, alternator, radiator, overflow tank and starter motor all show the correct numbers and are dated December 62 which would be correct for this car.

This car was ordered with the rare, but all important power brake option, which was unique to 63. This alone would cost a small fortune, if you could even find one for sale. Even all the glass is original with the correct Nov/Dec 62 ate stamps.

The NCRS shipping report confirms the official production date for this car as 24/1/63 and the delivery dealer was McClinton Chevrolet Co, Parkensburg, West Virginia.

DRIVING EXPERIENCE
This car has a very modern feel, with excellent brakes and steering.

I am 6'1" and it's a very comfortable driving position and I've happily done 100 plus with no fatigue.

Obviously, the rear view is hampered by the Split rear screen when reversing, but no issues when just using rear-view mirror.

The engine starts easily (no choke), but I always let her warm up for about 30 seconds before putting into D.

She will happily cruise at 70mph, and still has more to go beyond 90mph, but that's not me.

Another criticism would be the steering wheel is bigger than it needs to be with power steering, but I guess it adds to the period drive.

SUMMARY
In summary, this is a stunning example of the most desirable of the Corvettes accentuated with all the rare power options. Unlike so many cars of this era, this car wants to be driven, which is no hardship with a performance that would shame many modern sports cars.

The clock and radio still work, but the sound of the engine through the stainless magnaflow mufflers is all the sound track you need.

Underside is not only solid and rust free, but is as nice as you'll ever find on one of these.

A genuine touring car in every sense of the word especially with the civilised Powerglide transmission.

Ultimately, widely considered one of the best styling efforts of the sixties and the shortest lived Corvette design making this one of the most sought after Corvettes and a must have for any serious collector. This vehicle is an absolute treasure of authenticity, originality and rarity seldom seen in such a machine and it is sure to please even the most demanding individual. 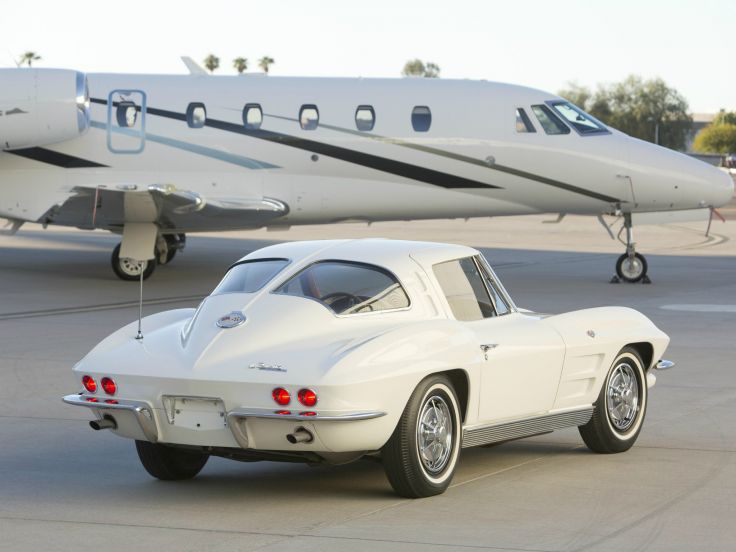 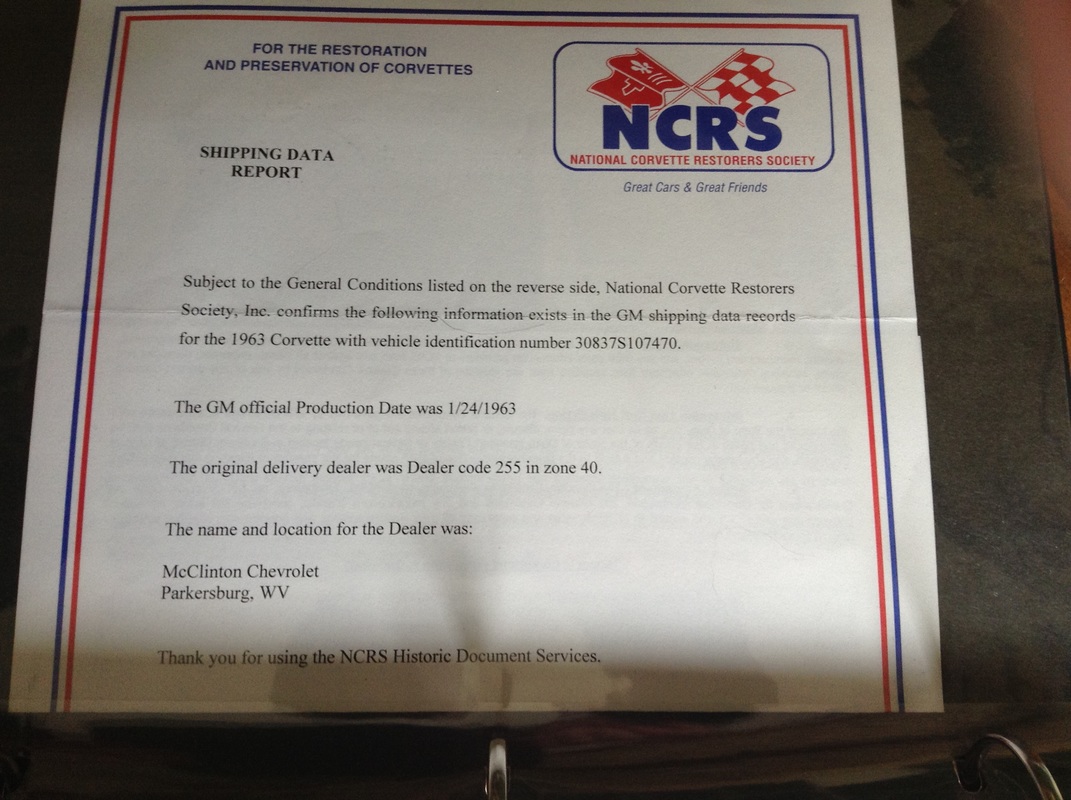 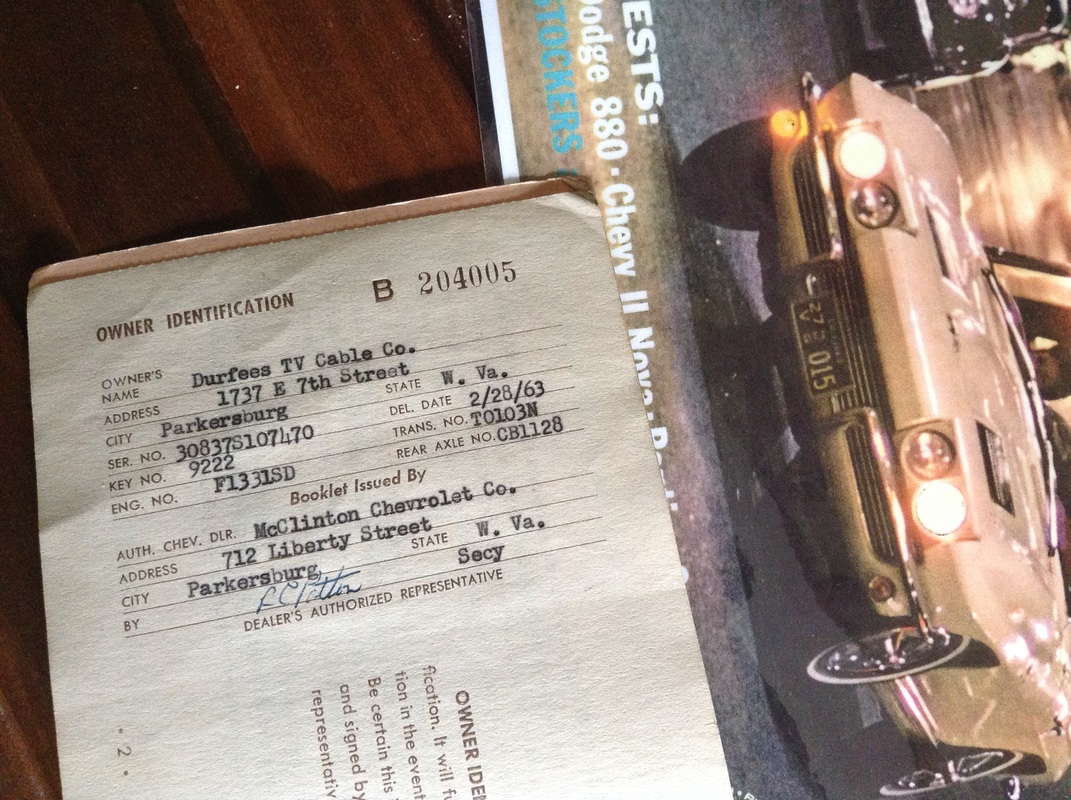 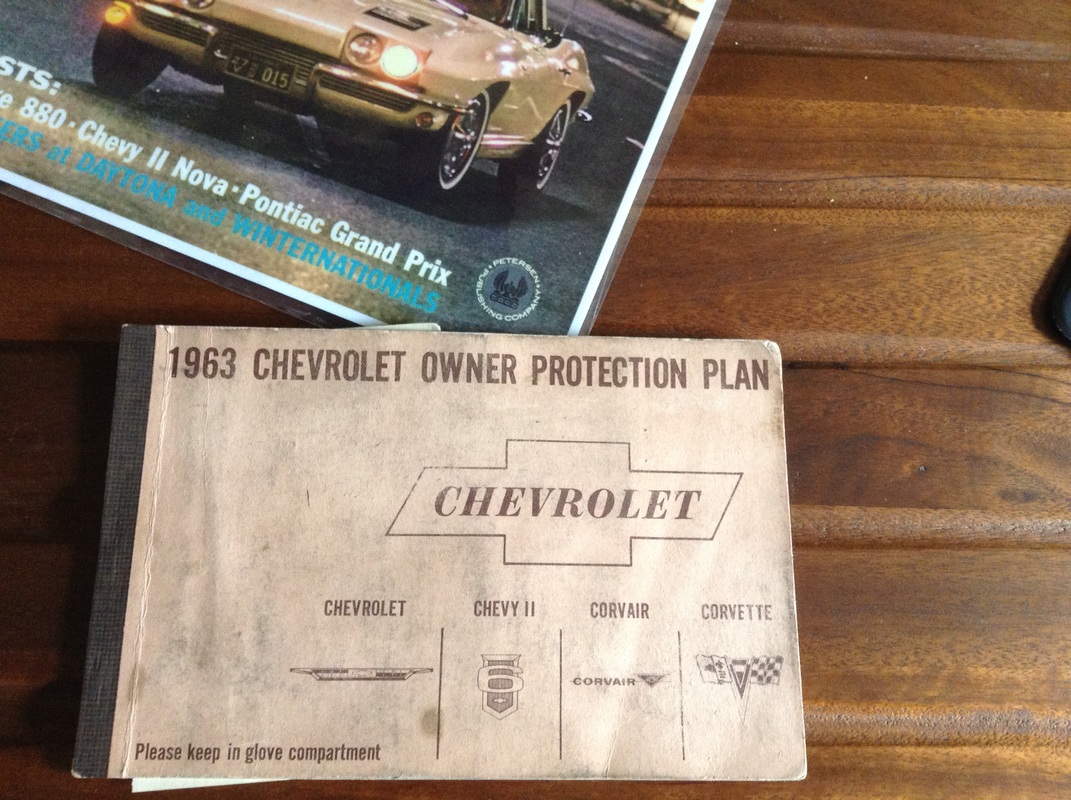 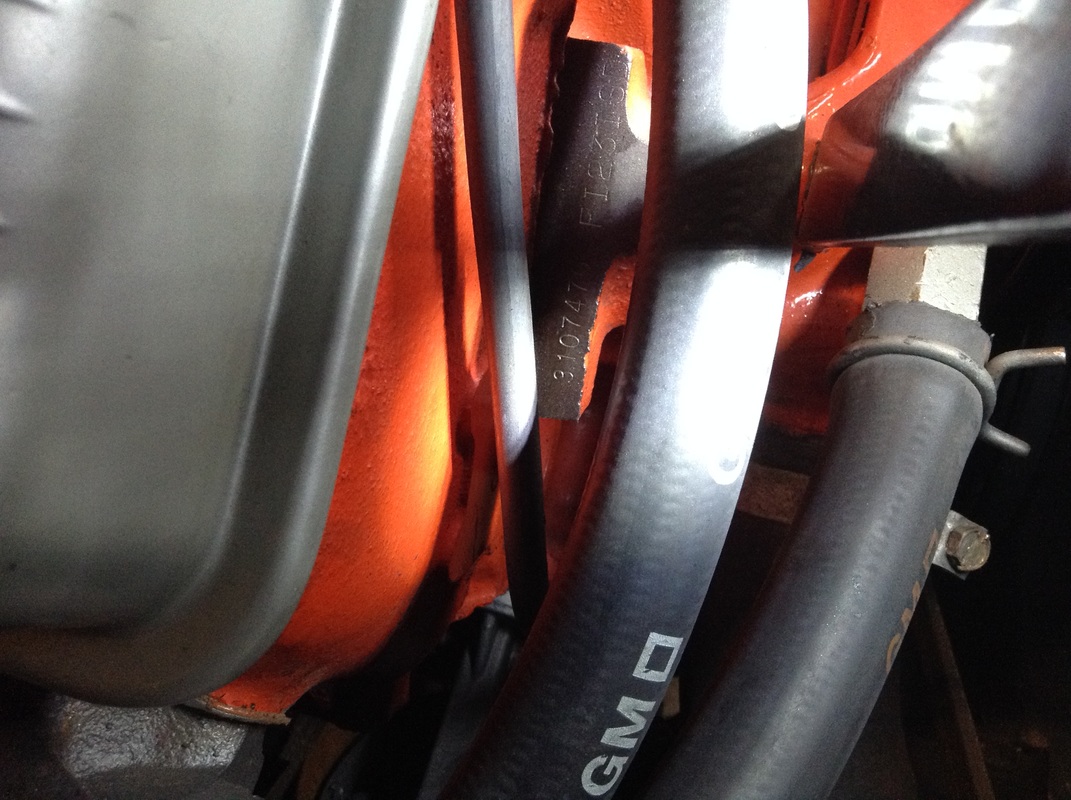 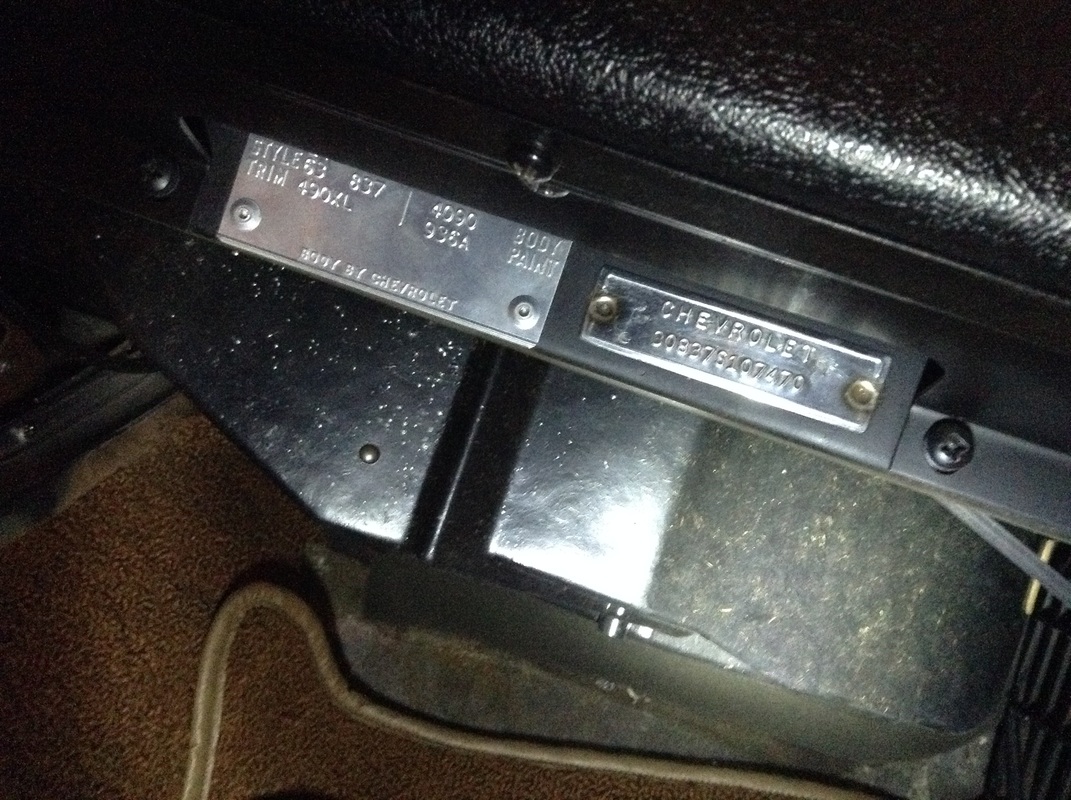 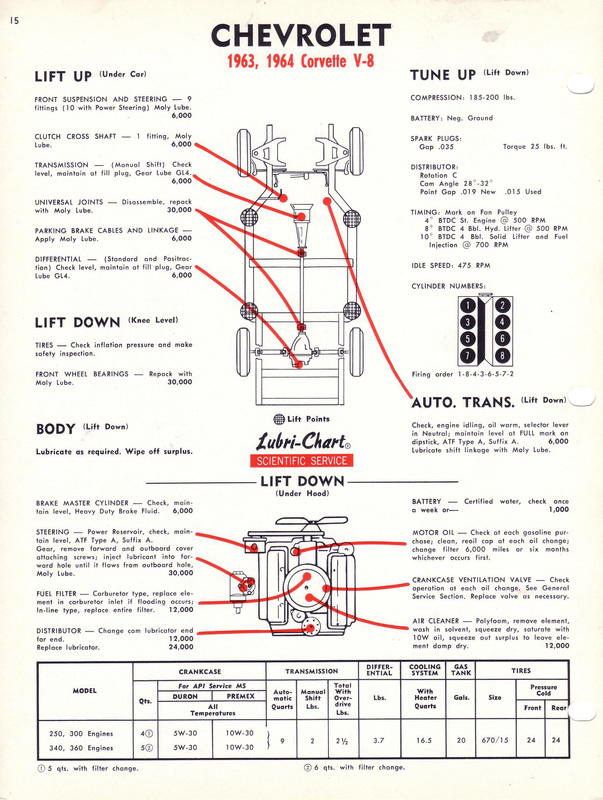 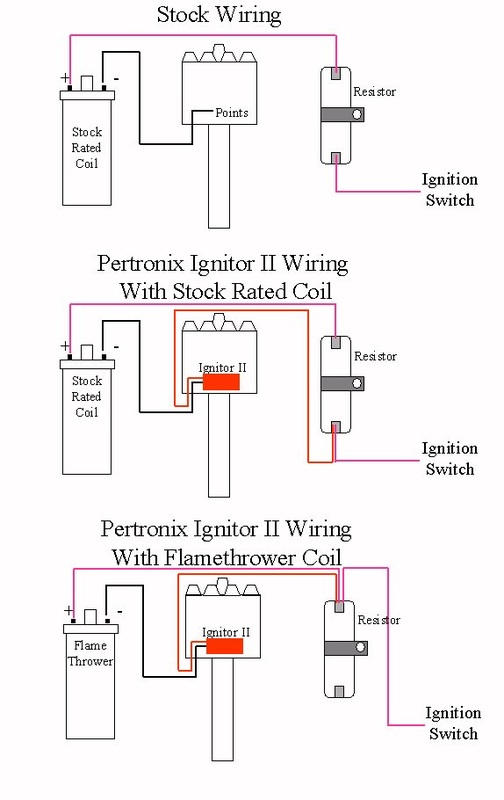 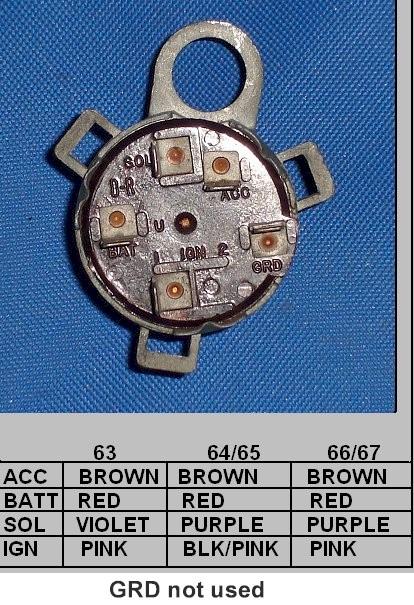 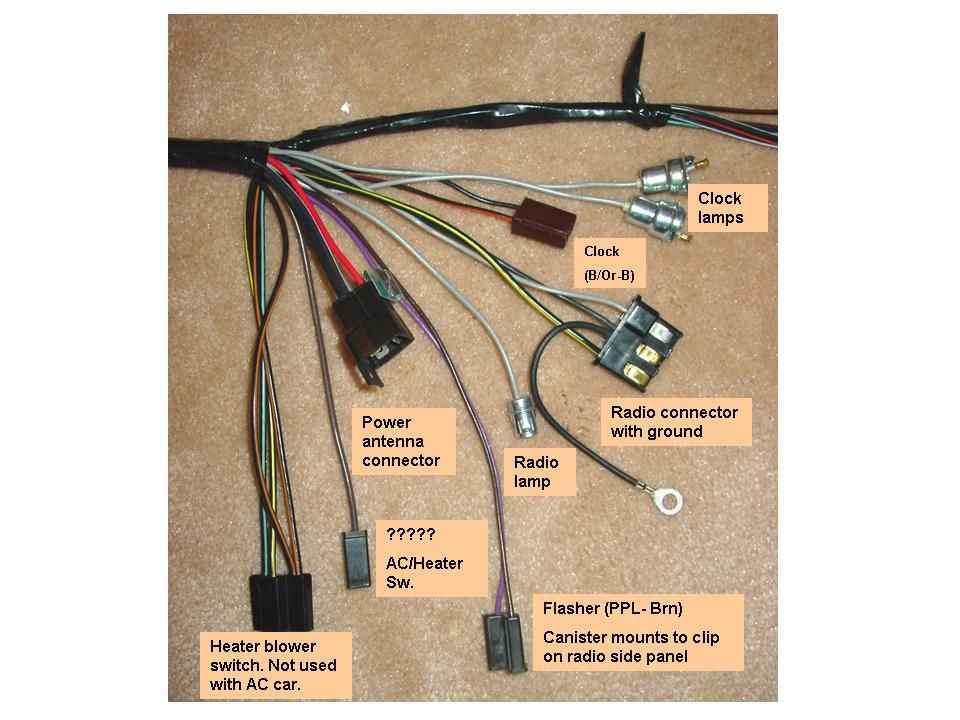 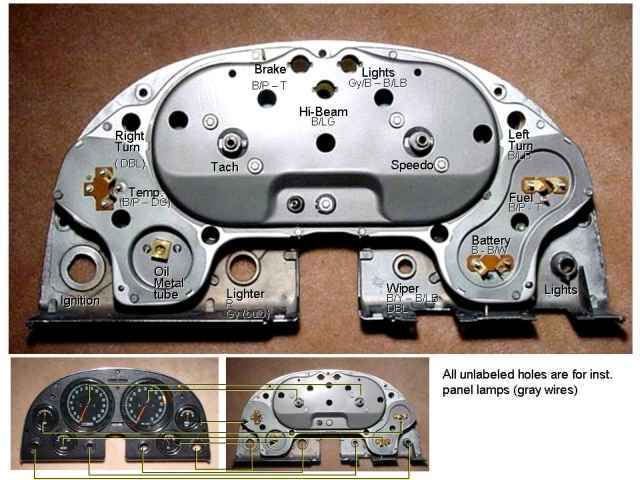 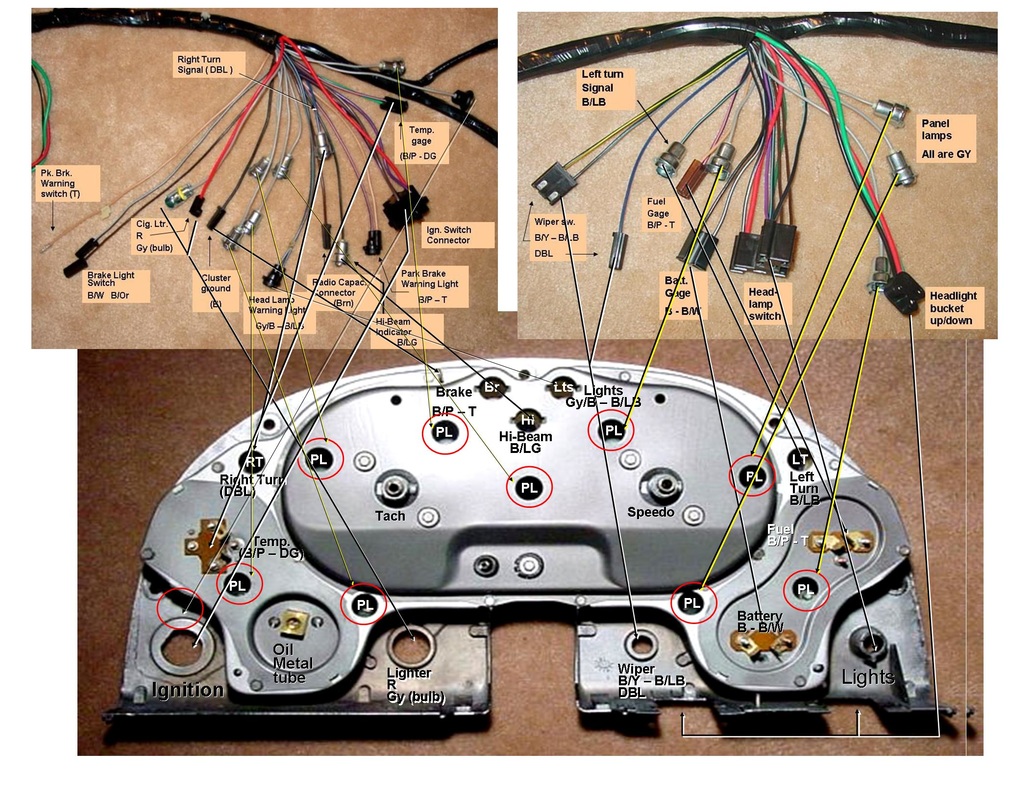 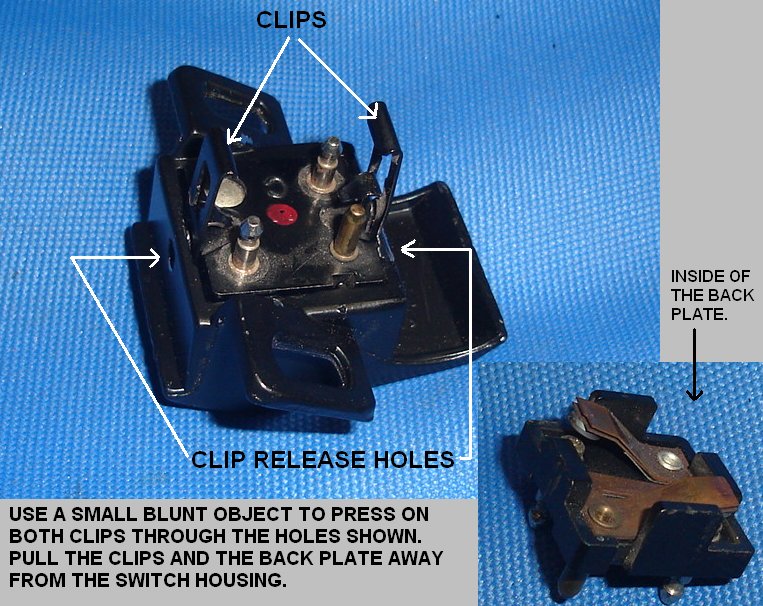 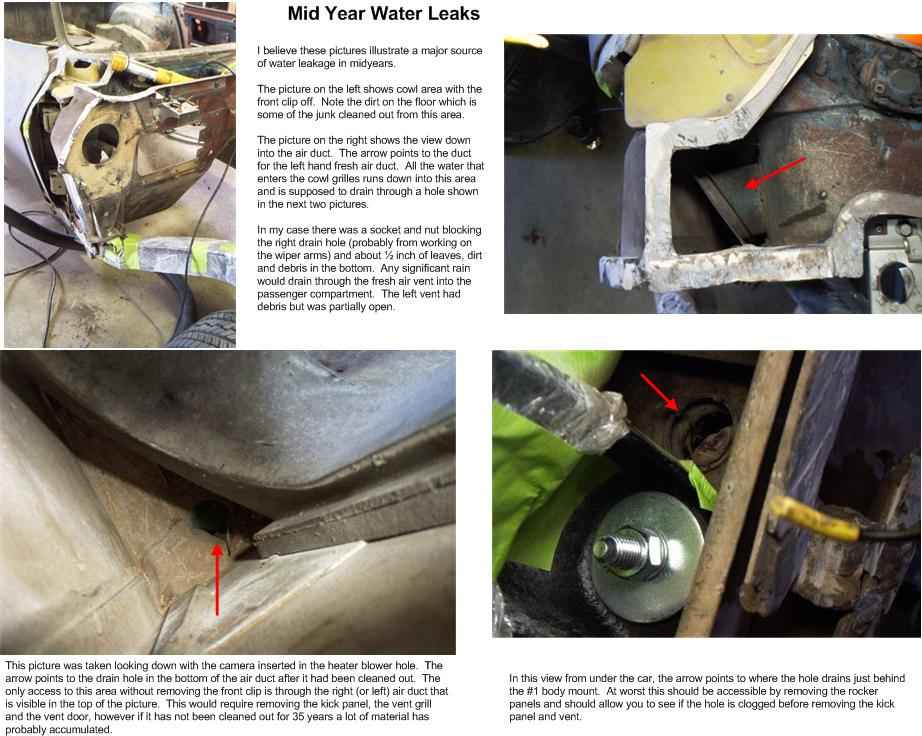 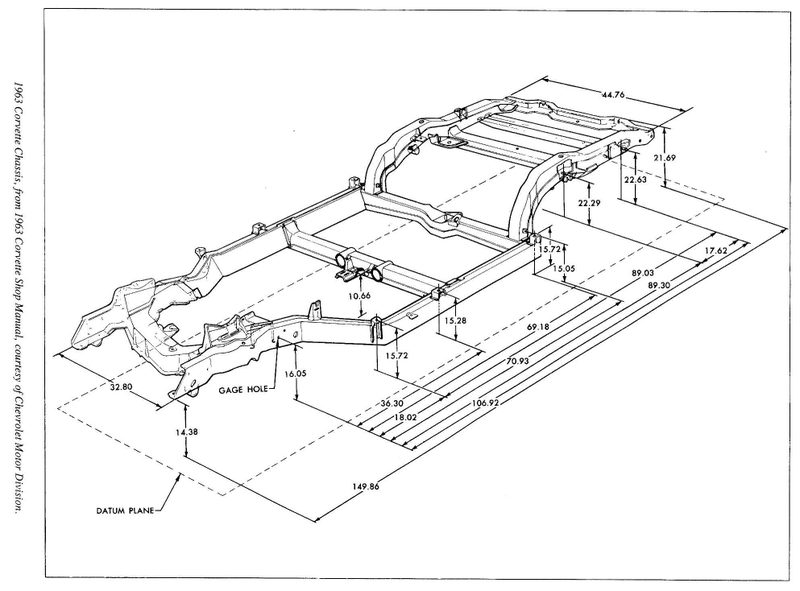 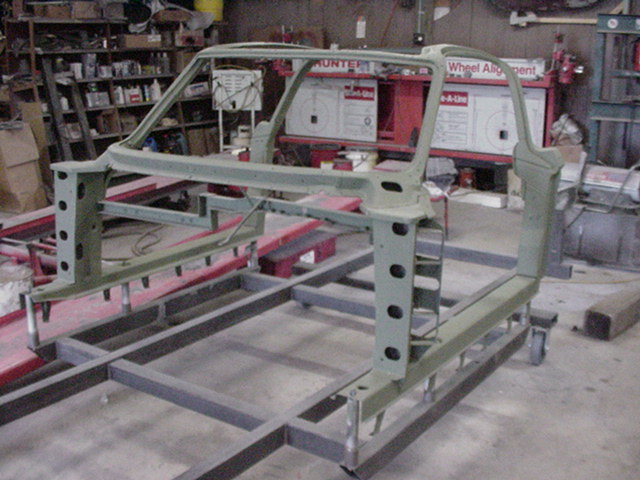 Originally hailing from Toledo, Ohio, the now-defunct Libbey-Owens-Ford Company produced OEM and replacement flat glass for the construction and automotive industries until 1986 when it sold to Pilkington in the UK. Among its products were windshields and windows for the C1 through C4 generation Corvettes. But how do you decipher the LOF glass codes?
First, find the LOF symbol. To the lower right, you should see a two digit alpha code. The first letter represents the month of manufacture and the second letter represents the year. So, if you had glass with the HA marking it would be July 1953 (C1). In some cases, your generation Corvette will help you determine the proper year code. For instance, GG could be April 1964 (C2) or April 1977 (C3). 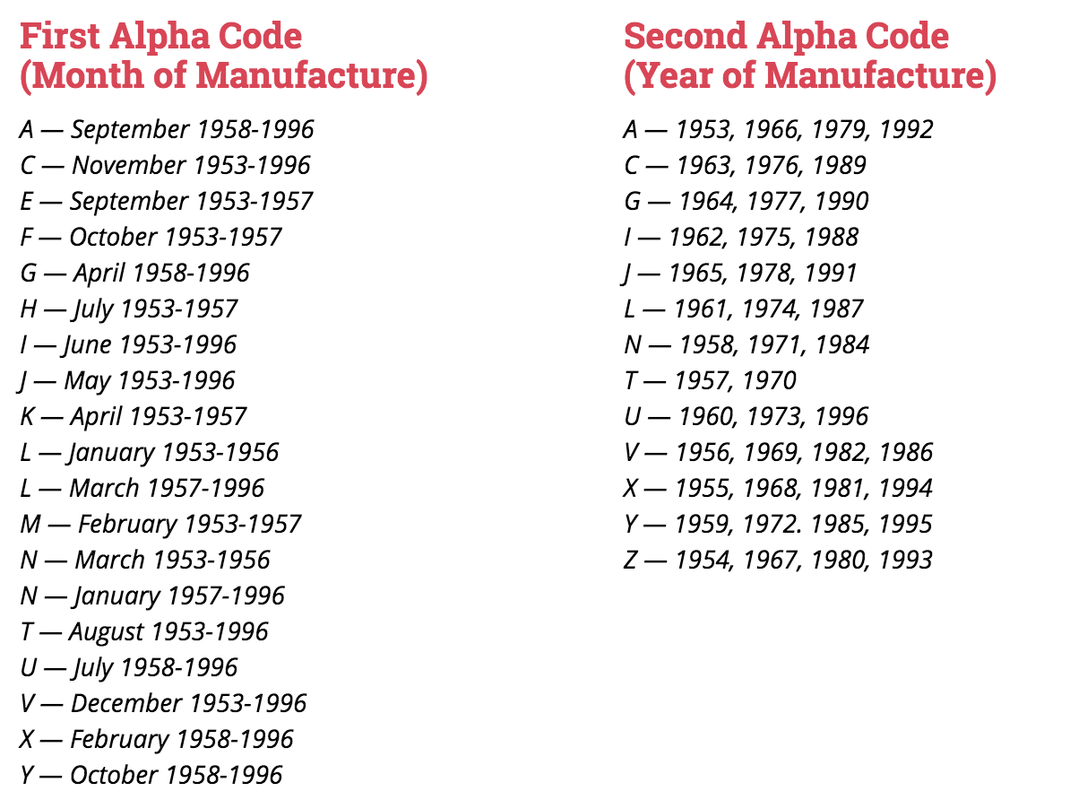 The squares shanked key is the ignition and doors, which all still work.

This cap still has the original roller. This is very rare as many fell-off or were swapped out. 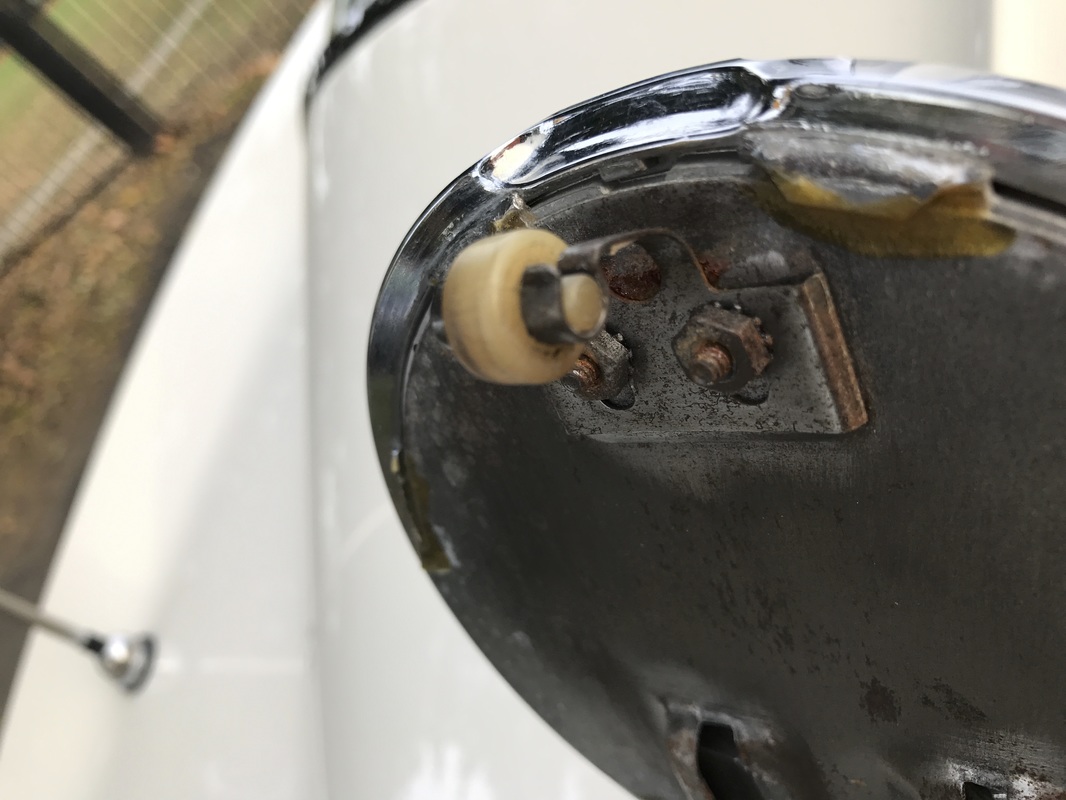 If you know your 63's, you will know that these hub caps were unique to this year and are therefore very rare. 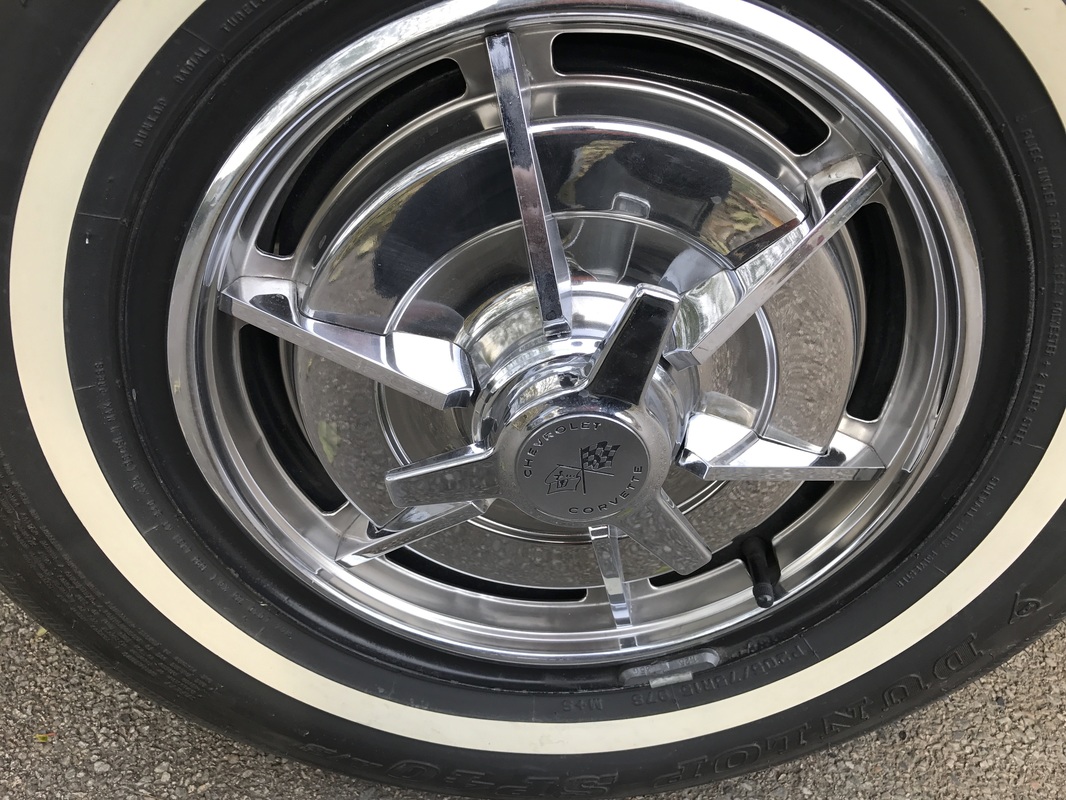