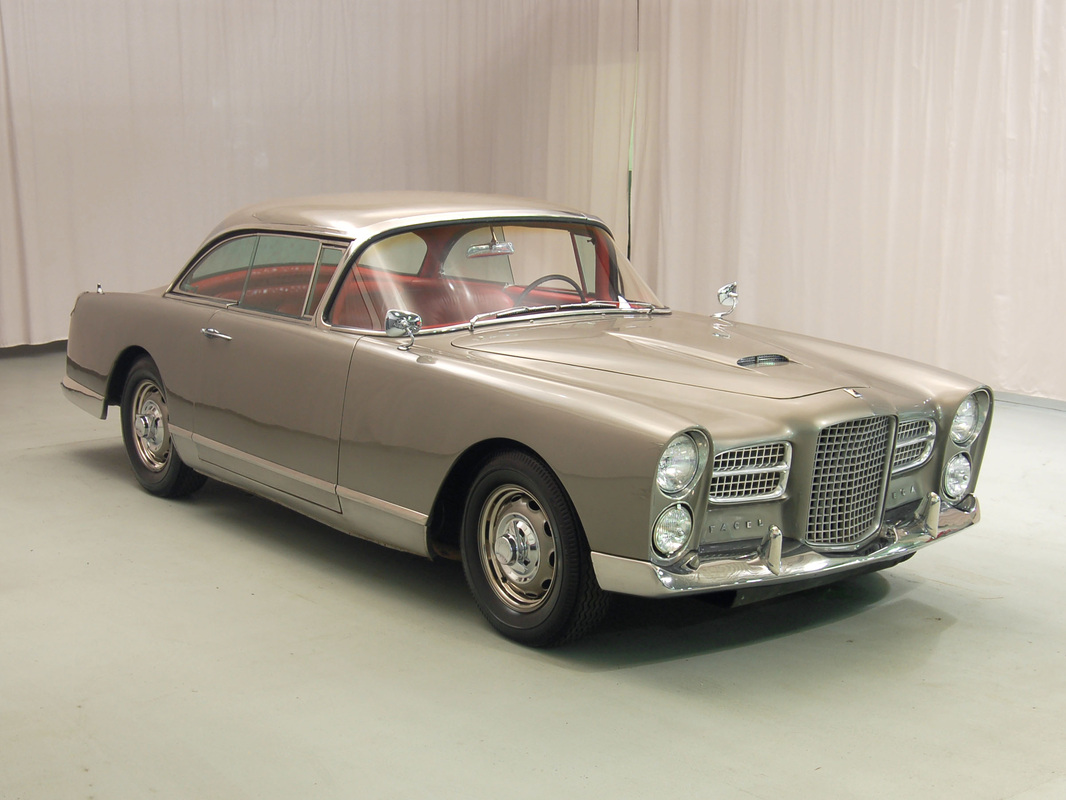 Jean Daninos owned Forges et Ateliers de Construcion d'Eure et de Loire in Paris, making machine tools before the war but afterword concentrating on metal office furniture and domestic cabinets while also subcontracting parts for French automobile manufacturers. In 1950 Facel, as the company was known, displayed a beautiful, refined coupe body on a Bentley Mark VI chassis, then a similar coupe on the Simca Vendome platform. They were the precursors to the Facel Vega which was introduced in 1954 with Chrysler Corporation V8 power and Torqueflite transmission. It was the first of the post-WWII Euro-American hybrids, and it remained in production into the early 60's.

Total production of the many Chrysler V8 powered Facels has never been established, but it is probably under 1,000. Their reputation for design, style, performance and quality has encouraged their survival, as this example shows. Titled as a 1961, it is powered by Chrysler's 383 Wedge V-8 similar to the Chrysler Saratoga which was rated 326 horsepower. The TorqueFlite automatic transmission is deservedly famous for its performance and reliability. Finished in metallic maroon with a black painted roof, it is upholstered in brown leather and has chrome wire wheels with Michelin blackwall radial tires, power brakes and power steering.

These stylish, luxurious and fast cars were hand built, they were, of course, necessarily very expensive. Facels were priced in Rolls-Royce territory and were bought by the rich and famous seeking something exclusive and distinctive. The roll call of owners includes royalty, politicians, diplomats and entertainers: Tony Curtis, Danny Kaye, Ringo Starr, Joan Fontaine and Ava Gardner being counted among the latter. Confirming that there was high-performance substance behind Facel's unquestionable style, they were owned and driven by great motor racing figures such as Sir Stirling Moss, Maurice Trintignant and Rob Walker.

Founded by Jean Daninos in 1939, Forges et Ateliers de Construction d'Eure-et-Loir (FACEL) specialised in the construction of aircraft components and metal furniture. After the war the company engaged in the supply of car bodies to Panhard, Simca and Ford France, before branching out into automobile manufacture in its own right with the launch of the Vega at the 1954 Paris Salon. Government legislation had effectively killed off France's few surviving luxury car manufacturers after WW2, but that did not deter Jean Daninos in his bold attempt to revive what had once been a great French motoring tradition. A luxurious Grand Routier, the Vega took its name from the brightest star in the Lyra constellation and featured supremely elegant coupé bodywork welded to a tubular-steel chassis. There being no suitable French-built power unit, Daninos turned to the USA for the Vega's, that chosen initially being Chrysler's 4.5-litre, 180bhp V8, while there was a choice of push-button automatic or manual transmission.

An improved model, the HK500, appeared in 1957. Maximum power was now around 360bhp courtesy of the latest, 5.9-litre (later 6.3-litre) version of Chrysler's 'Hemi' V8 and top speed rose to around 140mph, making the HK500 one of the fastest cars of its era. Power steering became an option and Dunlop disc brakes were adopted as standard equipment in 1960. Capable of effortless and virtually silent 120mph cruising, the HK500 possessed, according to The Motor magazine, 'a brilliant combination of good comfort and quite exceptional roadholding.' HK 500 production amounted to just 500-or-so units between 1958 and 1961, with circa 98 delivered to the UK, and today this rare Franco-American Grand Routier is highly sought after.

My HK500 represents the Facel in its ultimate, high-performance incarnation, being fitted with the 6.3-litre engine equipped with twin four-barrel Holley carburettors. Finished in Bronze/Gold with sumptuous red leather interior.

The interior was uncommonly luxurious, and of exceptional workmanship. The dashboard was aircraft-inspired, and one of the first to feature a middle console over the gearbox. The rear seats folded flat to provide a luggage platform and additional access to the boot. In 1955 the engine capacity increased to 4.8 litres and 200 hp (FV1), which later in the year grew to 250 hp (FV2). 47 of these early FVs were built in 1954 and 1955. Six were convertibles, but as these suffered from rigidity troubles the rest of the large two-door Facels were pillarless coupés.

Opening the wide, heavy doors, you step down into the typically soft, comfortable drivers seat. The large, very 1960’s black plastic steering wheel is vertical and not power assisted. While a little heavy at low speed, on the road it is very light, and makes for easy driving. You sit very low, and the view along the bonnet is dominated by the large hump in the middle of the bonnet to clear the air cleaners on top of the twin four barrel carburettors underneath. At speed, even with 50 year old rubbers on the windows, wind noise is negligible, and the sound from the dual exhaust, exiting via two outlets in the rear bumper is just enough to let you know this is a powerful car, without getting obtrusive. Driving along city streets, the rumble from the V8 immediately grabs attention, and it certainly turns heads. Parking it, or getting fuel, you always have to first explain what the car is to the inevitable group of bystanders before being able to go about your business.

After the HK500 Gran Turismo blew onto the scene in 1958 with a top speed of 140mph, Facel claimed it to be the world's fastest production car until the arrival of the Jaguar E-type in the following decade.

But the pleasure of its speed lay in knowing it was there. Facel Vega man left his henchmen to flee police; he would burble over at his leisure to pick up the proceeds. He would only push his slip-on Italian leather shoes to the floor if he was late to meet his consorts at a discreet hostess bar off Jermyn Street, with its blood-red walls and faint hint of menace.

The Facel advertising slogan? "For the few who own the finest".

An immaculate gunmetal example resides in my village and when its owner, Bob Dockerty, proprietor of Larkin's Brewery, takes it for a blast it always sparks the question: "What the hell is that?"

When I reply "a Facel Vega, dummkopfs", the admiring crowd remains mystified. These are as well crafted as Bristols, but with the sexy exoticism of a dancer in that club off St James's.

"It's so well made," says Bob, turning to the deep red interior with its myriad buttons and silver gear stick. "It even has electric windows. These cars were more expensive than Rolls-Royces."

We don't think of the French as doing fast, but before the war Hispano and Bugatti were the apogee of express sophistication. Facel was conceived in 1939 but occupying Germans converted the factory to build aircraft. Car production started in 1954. The Gran Turismo was the marque's finest flowering, its extreme oomph coming courtesy of a monster 6.3-litre Chrysler V8 engine.

Bob bought his in 1970 and uncovered a curious history. This car's first owner had a scrap yard in Glasgow. "Every few months he'd order a new, identical Facel. They even had to have the same registration," Bob says, pointing to the registration plate 2 RPC.

He describes its speed as "frightening". Certainly its potency combined with its weight make cornering lively, though it feels a solid beast. "I've only managed one wheelie," he says self-reproachfully. "With windows closed it's totally silent; open them and you are assailed by the roar."

Other owners included Dean Martin, Ringo Starr and Fred Astaire; Albert Camus died in one. But Facel Vega man, one likes to think, is still living it up, perhaps in Barbados, leaving behind a string of broken hearts and several unsolved crimes.

This car is very original having been imported from the US by me in 2010 it obviously enjoyed residency in a sunny state as there are no signs of rust or any welding anywhere. The interior and dashboard look original with no repairs. Mechanically, it does everything that it should and the brakes and steering are flawless. It’s a car that really wants to be driven, and if you are looking for a car that will sit in a garage and only be used say three times a year, then I would go for something else. Cars are like they need exercise and an engine of this size needs to be run hot at least once a month to avoid a visit to the docs. These American V8’s are workhorses and they rarely play up and this engine will probably outlive you providing you run her regularly.

Parts supply is excellent and any US car specialist will find this car easy to work on making it an all-round nice car to own.

This 1960 Facel Vega HK500 has always been maintained, receiving paint, upholstery and other attention as needed during its life. I don’t think that it has ever needed a full restoration and is in good running and driving condition with a straight, solid body. There are some paint flaws and the upholstery has developed a pleasing patina which invites further use free from concern about wear. It’s a good looking driver but not a fully restored car. It is a car that begs to be driven, exactly as Jean Daninos intended over a half century ago.

This is an iconic and powerful Grand Tourer that does everything that Italian exotics do but at a fraction of the price - I know, I've owned both. Things don't fall off, you won't need a trickle charger, a cambelt change every three days, or a bloke with a B.Sc. to change the plugs, but you do get that awesome V8 burble.

A rare opportunity to acquire a matching-numbers example of this supremely stylish Franco-American Grand Routier.