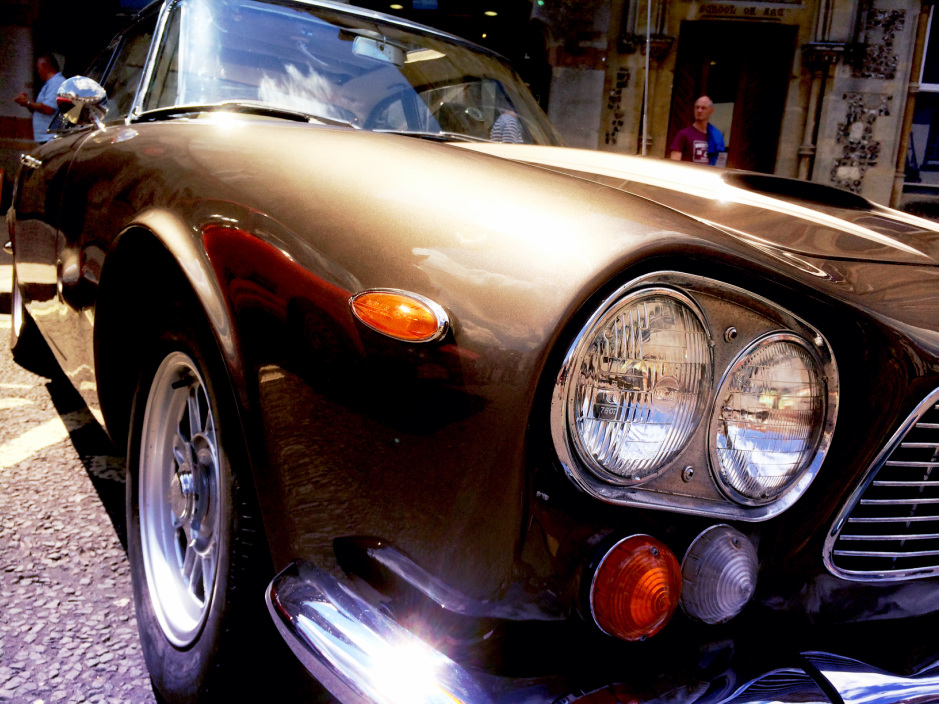 A quite remarkable example of these completely brilliant "Gentlemans' GT"

When introduced in 1964 they were, for a very short period, the fastest 4 seater motor car available in the World!

Founded by John Gordon and Jim Keeble, a British and an American businessman respectively, it had coupé bodywork designed by Bertone, mounted upon a spaceframe chassis.

Yes, it’s true. Back in 1963, when the first prototype was completed at the company Slough headquarters there was no badge or bonnet mascot. The prototype was wheeled out for the company’s management to view and just as they were looking at it, a pet tortoise from a neighbouring industrial unit waddled into view. As a joke, one of the engineers picked it up and placed it on the car's bonnet as a mascot, whereupon the tortoise proceeded to relieve itself all over the freshly painted bodywork. The tortoise inside a yellow circle became the company’s emblem from that day forward, but then Gordon-Keeble was never a company to do things in a conventional manner.

Fitted with a 327 cubic inch (5.3-litre) Corvette V8 and a fibreglass body, the Gordon Keeble was the UK’s fastest four-seater with a top speed of 160 mph and 0-60 in just six seconds - quick even by today’s standards.

A total of 99 were completed, plus one more built in 1970 after the company had folded, making it a rare and exotic beast today.

Under the bonnet, you'll find Chevrolet's venerable 5.3-litre small-block V8, which is a famously reliable and unstressed engine capable of delivering impressive performance.

Suspension was of the highest technical quality being independent all round with coils over wishbones at the front and a complex de Dion at the rear, again supported via coil springs

Naturally with all of this performance braking was provided via 4 wheel outboard disc brakes, as would have been found on a Formula 1 car of the period - but not much else

Launched at an initial £2.798 these were not priced for the faint of heart - this was serious motorcar money in those days and the creators of these GT's ( John & Jim ) hadn't held back in any way on the quality of the product they offered. Not only was the GK a technical tour de force, it was astonishingly beautiful, for they had commissioned Bertone to style their 2 door coupe and as was so often the case, Bertone had come up trumps

Gordon-Keeble was a British car marque, made first in Slough, then Eastleigh, and finally in Southampton (all in England), between 1963 and 1967. The marque's badge was unusual in featuring a tortoise — a pet tortoise walked into the frame of an inaugural photo-shoot, taken in the grounds of the makers. Because of the irony (the slowness of tortoises) the animal was chosen as the emblem.

The Gordon-Keeble came about when John Gordon, formerly of the struggling Peerless company, and Jim Keeble got together in 1959 to make the Gordon GT car by fitting a Buick 215 c.i. (3.5 litre) V8 engine (the engine which would later be developed and used by Rover), into a chassis by Peerless. The car, still at the development stage, was then tried with a 4.6 litre Chevrolet (283 c.i.) V8 fitted into a square-tube steel spaceframe chassis, with independent front suspension and all-round disc brakes. The complete chassis was then taken to Turin, Italy, where a body made of aluminium panels designed by Giugiaro was built by Bertone. The car's four five-inch headlights were in the rare, slightly angled "Chinese eye" arrangement also used by a few other European marques, generally for high-speed cars such as Lagonda Rapide, Lancia Flaminia and Triumphs, as well as Rolls-Royce. The interior had an old luxury jet feel, with white on black gauges, toggle switches, and quilted aircraft PVC.

The car appeared on the Bertone stand in March 1960, branded simply as a Gordon, at the Geneva Motor Show. At that time problems with component deliveries had delayed construction of the prototype, which had accordingly been built at breakneck speed by Bertone in precisely 27 days. After extensive road testing the car was shipped to Detroit and shown to Chevrolet management, who agreed to supply Corvette engines and gearboxes for a production run of the car.

The car was readied for production with some alterations, the main ones being a larger 5.4 litre (327 c.i.) engine and a change from aluminium to a glass fibre body made by Williams & Pritchard Limited. Problems with suppliers occurred and before many cars were made the money ran out and the company went into liquidation. About 90 cars had been sold at what turned out to be an unrealistic price of £2798. Each car had two petrol tanks.

In 1965 the company was bought by Harold Smith and Geoffrey West and was re-registered as Keeble Cars Ltd. Production resumed, but only for a short time, the last car of the main manufacturing run being made in 1966. A final example was actually produced in 1967 from spares, bringing the total made to exactly 100. The Gordon-Keeble Owners' Club claim that over 90 examples still exist.

An attempt was made to restart production in 1968 when the rights to the car were bought by an American, John de Bruyne, but this came to nothing, although two cars badged as De Bruynes were shown at that year's New York Motor Show along with a new mid-engined coupé.

The Telegraph (2009)
Styled by Giugiaro and built by Bertone, the prototype was rushed to America to convince Chrysler to allow them to use the company's 280bhp, 5.3-litre V8.

Permission was given, but this was a classic tale of small-volume tribulations.

The coachwork was changed from aluminium to glass-fibre, production moved from Slough to Eastleigh and the car's heating and ventilation were rubbish.

For all that, the GK1 was a cut above, especially at the £2,798 asking price. It was fast, very quiet and luxurious and rode and handled well; quite the grand tourer it purported to be.

Cash flow and that price proved problematic, as was a strike at the steering supplier.

Yet even when the firm went bust, such was the appeal that production was taken up by Rolls-Royce specialist Harold Smith.

Why you want one: a really handsome GT, rare and fast, plus it has 'Chinese Eye' headlamps – what's not to like?

Why you don't: no one knows what it is. Early Sixties fuel consumption isn't easy to live with these days.

You might not know: the bonnet badge shows a tortoise – ironic, considering the GK1's speed. It was born when a pet tortoise ambled into the first photoshoot of the car.

This car is chassis number 71 and has been extensively restored at some point with a body-off restoration. The engine is relatively knew Edelbrook V8. Unlike other classic cars the owners of these cars do not get hung up about matching numbers.

I have spent a bit of time sorting out various minor issues with the brakes and fuel system, and the car now needs nothing other than to be enjoyed.

The interior is leather, but has been re-upholstered in a non-original pattern. Ordinarily I would change it, but I so like the patina of the leather and it’s been done really well and is very comfortable that I can’t justify it.

Considered as desirable as a Ferrari at the time, it nonetheless lacked the cachet of a famous name. Ultimately, the Gordon-Keeble was a commercial failure because it was under-priced. It's a very sought-after car today because of its rot-free body, excellent road manners and usability with modern V8 mechanics.

Given all the benefits, and the exclusivity it’s no surprise that these cars are appreciating year on year.

First registered 'BEM 500C' on 30th March 1965, this manual transmission example was originally owned by Norwest Construction Ltd and used by Dennis Baucher Le Mare, who had joined his father in the family business, which later became Norwest Holst. (Arguably the best known of the Le Mare family is Noel Le Mare, owner of the three-time Grand National-winning racehorse 'Red Rum', which perhaps explains the reference to the horse on the build sheet). Mr Le Mare appears to have owned the Gordon Keeble only briefly, as one P Jeffery of Appleton, Cheshire is listed as second owner that same year. 'Dark green' is recorded as the original colour, which was changed to Electric Blue metallic circa 1971. The current livery of Ferrari Pearl Brown was applied during the course of the car's restoration, undertaken by BHB Engineering and the vendor between 2006 and 2009, while the interior, originally cream, has been re-trimmed in red-piped cream leather. A new V8 engine was installed as part of the restoration, since the completion of which the car has covered only some 1,000-or-so miles. 'On the button' and ready to show or enjoy, this British GT is offered with sundry restoration invoices, current road fund licence, MoT to April 2011 and Swansea V5 registration document.

This is an iconic and powerful sports car that does everything that Italian exotics do but at a fraction of the price - I know, I've owned both. Things don't fall off, you won't need a trickle charger, a cambelt change every three days, or a bloke with a B.Sc. to change the plugs, but you do get that awesome V8 burble and power.