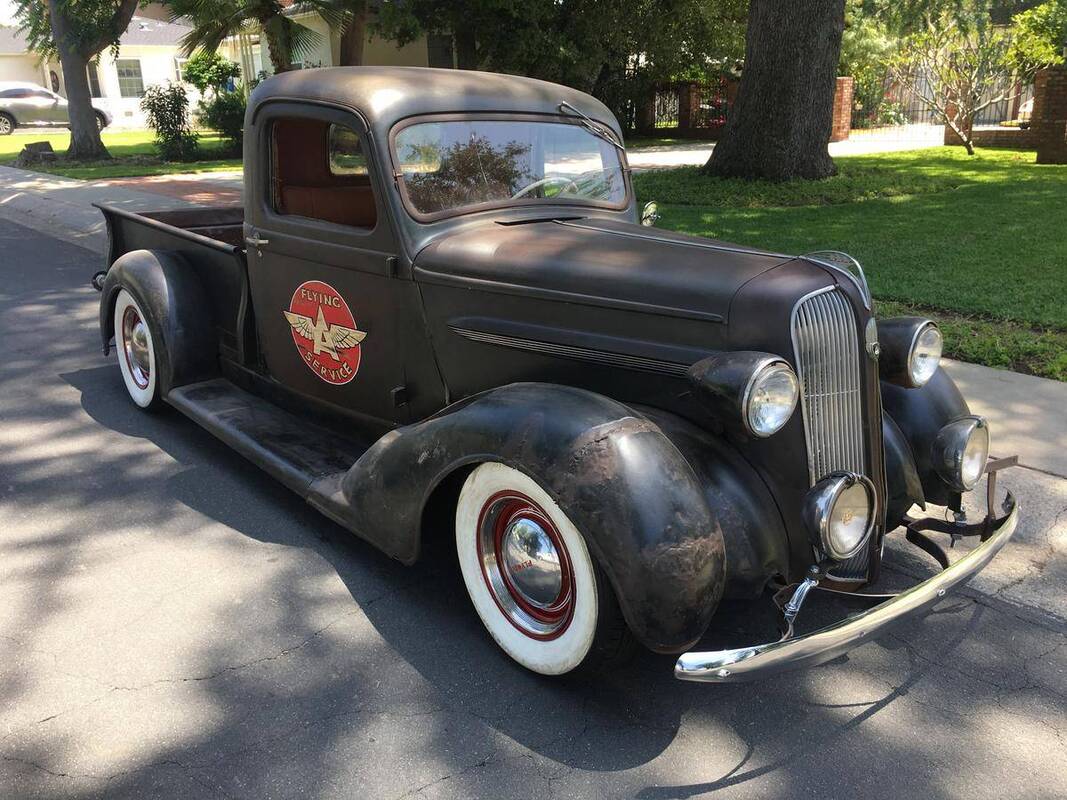 One of the Most Beautiful Trucks ever produced in America

The Plymouth PT50 pickup is a Very low production pickup making them extremely rare and sought after. I have searched for two decades and never seen one like this one cab corners are rock solid and original, never ever touched - Original 65K miles- Never painted - a Survivor Body.

The smart and plush Interior is of course striking especially when juxtaposed with the exterior. The bench seat is original. The dash still has its original 2 dials, but is now complimented with important additional gauges:

The old wind-out front windshield still works like new and provides all the fresh cool air you will ever need even on a scorching hot-day.

The dash was completed by a Master Wood grainer. Carpet is Wilton Wool.

The restoration that I undertook is detailed elsewhere on this site, but in brief the truck was very unsafe when it arrived from the States with various modifications poorly done. I spent about 300 hours going through every aspect of the truck, which included remanufacturing cross-members, handbrake linkages etc. The brakes and suspension was also completely overhauled.

The underside was painstakingly stripped back to bare metal and then treated with professional products to preserve it for another 8 decades.

I completely rewired the whole truck and whilst at it I installed a rear-view camera to make driving a left-hooker safer on British roads.

Perhaps the biggest headache was the tight cab. I am 6' foot and anything pre-war is a tight squeeze. However, I adjusted the brake and accelerator pedal, installed an electric control system for the transmission and made some adjustments to the rear seat squab so now it's perfectly comfortable.

It is not commonly recognised by automotive enthusiasts, but Plymouth entered the light truck field in 1937. This seemed especially aggressive considering the fact that Plymouth also spent considerable money on tooling and production of two almost totally new lines of passenger cars. Parent Chrysler made the commitment to take additional market share from others with the growing popularity of the Plymouth brand. This combination of factors worked, as the marque’s reputation for economy, durability, and reliability rocketed Plymouth to third in the industry in passenger car sales for 1937.  It was offered with a bed for $525, or as a cab chassis and fenders for $495. This inaugural year was a success for the Plymouth PT50, and the company built 10,867 units total.

Plymouth dealerships often with paired with Dodge stores, and thus had Dodge trucks available to sell, but some were linked to DeSoto or Chrysler outlets and thus the need for a Plymouth-badged truck line. At first, the Plymouth commercial sedans were delivery vehicles and taxi cabs or wood-panelled Suburbans, but in 1937 there was the PT-50 pickup, though officially it was called a commercial car.
PT-50s were built in Michigan, Indiana and California. Of some 14,700 Plymouth commercial cars built in 1937, about 10,700 were PT50s. The others were station wagons, sedan deliveries or were sold as chassis with cab.
The addition of the commercial car line was buoyed by the PT-50 Pickup, the most popular offering. Others included a ½-ton chassis able to be fitted with special bodies up to one ton in capacity, the Commercial Sedan (a panel delivery), and the Westchester Suburban, which offered station-wagon utility in a more robust size and capacity. Passenger car sheet metal was not shared with the commercials.

The PT-50 featured safety glass all around, along with a front bumper and right front side-mounted spare tire as standard, all for $525.00 before options. The rear bumper was optional. The six-foot long box had a width of 47.5 inches, and power was supplied by an 82-horsepower L-head six-cylinder engine with a bore of 3⅛ inches and a stroke of 4⅜ inches, along with a compression ratio of 6.7:1. The standard three-speed manual transmission featured silent helical gears in second speed. A total of 10,709 were built for the model year. Plymouth’s commercial car line did not return when production resumed following WWII.

​Plymouth only built trucks for a short period of time. The first year for Plymouth pickups was 1937 and the last was 1941.  The fenders were normally painted black, but could be ordered with fenders the same colour as the body. Plymouth built 15,564 Commercial vehicles in 1937 at a cost of $525.   They were made in Detroit, MI., Evansville, IN. and Los Angeles, CA.

For the 1938 model year, Plymouth changed the truck’s name to PT57 and raised the price, but altered little else. Sales of the pickup dropped to 4,620 units, likely due to a national recession.

In 1939, the PT81 rolled out as an all-new truck alongside identical Dodge- and Fargo-branded rigs. The cab and bed were slightly larger, and the spare tire was mounted under the truck, below the bed, hanging from the rear frame rails. The grille was sharpened to a point, with horizontal louvers that spread out onto the lower front fenders. Sales picked up to just over 6,000 units in 1939 and increased to 6,879 for the nearly identical 1940 PT105. The final edition of the Plymouth pickup was the 1941 PT125, which received some chrome trim on the grille and fender-mounted headlamps.

Today, Plymouth PT series trucks are sought after by aficionados and are an uncommon sight at shows. The few who have restored these trucks can attest that the trim pieces unique to Plymouth trucks can be difficult to locate, though many of the major components are common to Dodge trucks and Plymouth cars.

One day in 1965, when Nelson was 25, the vineyard owner pulled into the gas station driving a new Chevrolet pickup. Nelson was concerned about the fate of the Plymouth, to say the least. “I asked: ‘What did you do with my truck?'” Nelson said. “I know I promised it to you,” the man replied. “I gave it to my son, though he isn’t doing anything with it.”Those words resonated with Nelson, so on a July day, he and his wife Barbara made the 20-mile trip to Naples, New York, at the southern tip of Canandaigua Lake, to see if the little Plymouth truck could be bought. The vineyard owner’s son turned down Nelson’s offer, but called him in December, undoubtedly hoping to sell the truck and make some quick holiday spending cash. “I was running a gas station, so any extra money I had went into buying snow tires and batteries that I could sell to my customers over the winter,” Nelson said. “But I made him another offer on a Wednesday and told him he had to have the truck to my house by Friday night. I don’t think I slept for the next two nights thinking about it, but I didn’t want to give him any more money.”

With its limited production and the use of most trucks of the period as work vehicles, it is unusual to see a Plymouth pickup surviving today, let alone in original unmolested (body) condition.