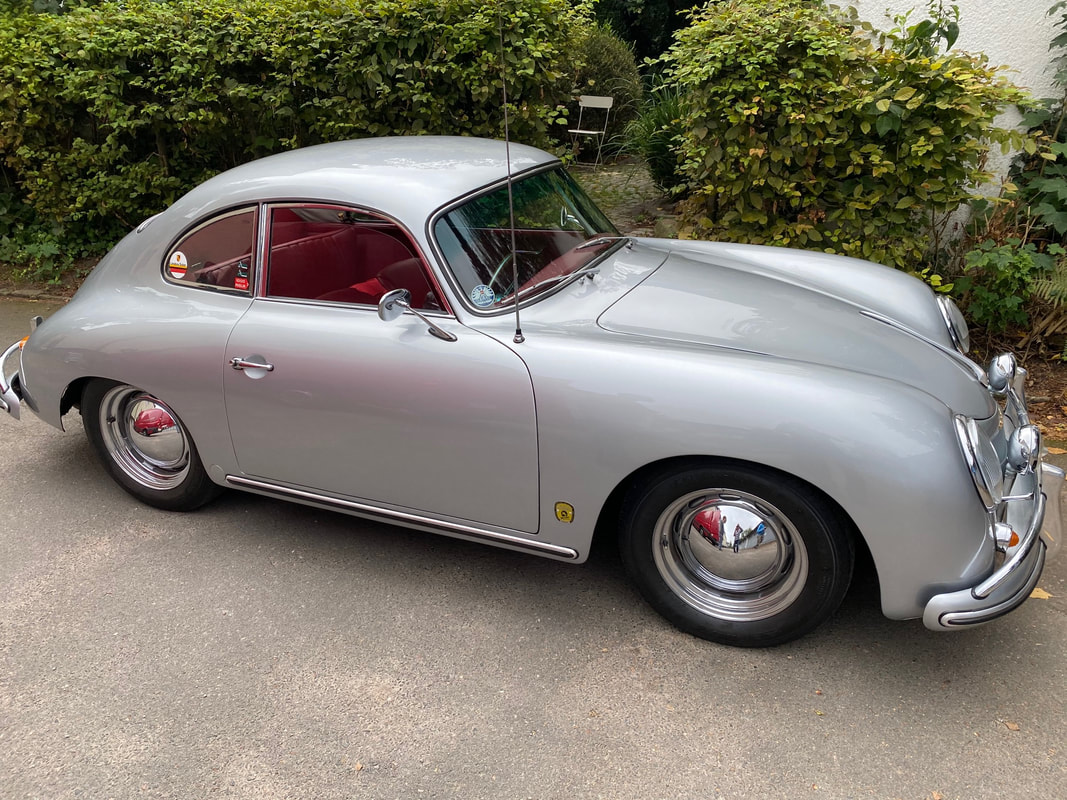 The Porsche 356 was the company's first production model. It was a lightweight and nimble handling rear-engined, rear-wheel drive, two-door sports car available in hardtop and convertible configurations. Design innovations continued during the years of manufacture contributing to its motorsports success and popularity. Production started in 1948 at Gmünd, Austria where approximately 50 cars were built. In 1950, the factory relocated to Zuffenhausen, Germany and general production of the 356 continued until April 1965, well after the replacement model 911 made its autumn 1963 debut. The 356 was created by Ferdinand 'Ferry' Porsche (son of Dr. Ing. Ferdinand Porsche, founder of the company). It was common for owners to race the car as well as drive it on the street. Increasing success with its racing and road cars brought Porsche orders for over 10,000 cars in 1964 and, by the time 356 production ended in 1965, approximately 76,000 had been produced.

As the first serial production car to wear the Porsche name, the 356 was the car that set the company firmly on the path of building high quality, cleverly engineered sports cars that could punch well above their weight both on the road and on the race track. The 356 was a relatively simple car that shared its basic layout with the Volkswagen, with a monocoque chassis design and a highly reworked version of the VW’s flat-four cylinder engine slung out behind the rear axle. For his own car, Dr. Porsche dramatically improved the VW engine with new heads, new cam, new crankshaft and other internals, as well as a dual carburettor intake. The result was an engine that revved free and produced double the horsepower of the People’s Car. True to the Porsche Ethos, the 356 was continuously being refined and revised over its 17 year production run without ever really being fully redesigned. By the end of the run in 1965, horsepower had nearly doubled again from the first 356s

Along with its continual mechanical refinement, the 356 was offered in many different body configurations sourced via a variety of German coachbuilders. Standard cars included the Coupe, Cabriolet and Speedster. There were also Notchback, Roadster and Convertible D variants, most featuring subtle differences in the shape of the body.

There are three types of classic car owners: those that buy trailer queens for investment with varying degrees of knowledge or passion for Classic cars; those that buy classic cars with the best of intentions, but they languish in lock-ups rarely enjoying a dose of vitamin D, and those that are genuinely enthusiastic about their cars and use them.

The previous owner of this car was a fastidious purist and enthusiast, but he also enjoyed driving this 356a. Thomas Sergay was a German aircraft engineer who had spent most of his working career at Lufthansa.  When I went to inspect the car Thomas spent two hours carefully walking with me around the car and explaining all the work that had been done and the many important original aspects of his car.

Invariably, when I purchase a new car I’ll spend a week or so underneath it drilling holes and injecting it with very solutions and potions to extend its life. It’s therefore really gratifying to meet someone who shares my passion for rustproofing and this is the only car that I’ve ever purchased which has endured the same tireless commitment to preservation that all my cars eventually experience. Interestingly, Thomas used a solution adopted by the German military. When I first inspected the car, I recall it being a messy affair with liberal coatings of wax inside the wings, underneath, in fact pretty much everywhere.

When I decided I wanted to purchase a right hand drive 356 say there were literally none for sale, but then came along Covid and four became available and I inspected each of them. As these cars were never rust-proofed from the factory, they had all been the subject of a major restoration with varying degrees of expertise.

Literally, just before I was about to shake hands on another 356A this car was advertised on Classic and Car. Traveling to Germany at the time with the inevitable quarantine when returning was a strong deterrent, but nevertheless, I made the journey to Hamburg to view the car. I was so pleased I did as this was hands-down the best of all the cars that were for sale at the time. Initially, I was suspicious why a German national would be driving a right hand drive car, rather like me he had inspected many cars prior to purchasing this one and was disappointed with the level of restoration.

From what I could establish, Thomas had only driven around 4000 miles during his relatively long term ownership of the car. It would also appear most of these miles were undertaken in vehicle rallies where punctuality was more important than speed.  The car still retains the rally timer and clocks, which I have no idea as to the operation, but they look at home in the Cockpit.

I have owned many classic cars and all too often when you buy a car it takes weeks if not months of fettling, tuning and repairs to get it running right. It’s hardly surprising anyone selling a car hasn’t spent the preceding months of ownership fine-tuning everything. After I test drove my first two 356's I began to question whether this was a car I wanted to own. I accepted the fact it would have an agricultural driving experience, but I was alarmed by the poor brakes and clunky transmission. Fortunately, I stuck with it and this 356A is testimony to the maintenance bestowed on this car by its German Owner. Everything works and works as it should.

You will not find a 356A that has not been restored at some point because all the tinware is single skin and it left the factory without any rustproof. I can't find any visible signs that the belly pan this has been replaced and even though it came from climate friendly South Africa I would anticipate it’s been changed at some point. Furthermore, there are no signs of dents or damage to the underside and lift in the carpets exposes unspoiled metal work.

Although the engine is not original to the car, it is age correct and as far as I know all the ancillaries are also period correct.

The car is currently fitted with bucket seats in the same resplendent leather as the rest of the car. If these are not to your liking, then the car comes complete with the original seats, which would fetch around £5,000 alone.

The original 4 1/2 inch wheels, which would benefit from a makeover are also available.

When I decided to buy a Porsche I couldn't decide upon  a 356A, 356C or indeed and 912. Ultimately, the period look of the 356a gripped me making the decision easy. I also learned the pre A’s we’re not much fun to live with.

At 6’1” most cars of the 50s I find uncomfortable as they have insufficient legroom and head height. It’s therefore surprising how Porsche managed to make what appears to be a relatively small car so spacious and comfortable inside.

This car was originally delivered to South Africa and came back to Germany in 1986. The previous owner purchased the car in 2004 after a lengthy very detailed sympathetic restoration by the former owner including the typical rust repairs (sills, door bottoms, battery box) and a respray in silver plus an upgrade to a full leather interior. Today the car is featuring a Halda Rallye equipment, a correct clock, a 1959 Blaupunkt Koeln signal seeker radio, a Derrington steering wheel by Mota Lita and steel bucket seats (original seats are still with the car). All panels except the passengers side door are original. Tyres are Avons on 5,5 Mangels chrome rims (I have a set of 4,5 Lemmerz, unrestored). In 2009 the non matching engine was replaced with an almost unused (less than 200 hours) period correct industrial engine which had been completely rebuilt to S-spec (in total 15.000 Euros invested). Exhaust is a stainless Ahnendorp Sport.

In 2016 the car was assessed by Classic Data. The resulting certificate shows a rating of "1-" and an insurance value of 143.000 Euros.

I have comprehensive documentation of all the works and a lot of pictures.

During my ownership I have used the car sparingly and it's only because of this reason that I am selling it. I have a rough and ready 356A of the same era, but it's in the sort of condition that I have don't have to worry about the odd ding and that's why this one sits in my garage. That said, this car starts right up with no issues whenever you start it.

This is a very reluctant sale and therefore I won't entertain silly offers as a RHD immaculate 356A is a Blue-chip investment. 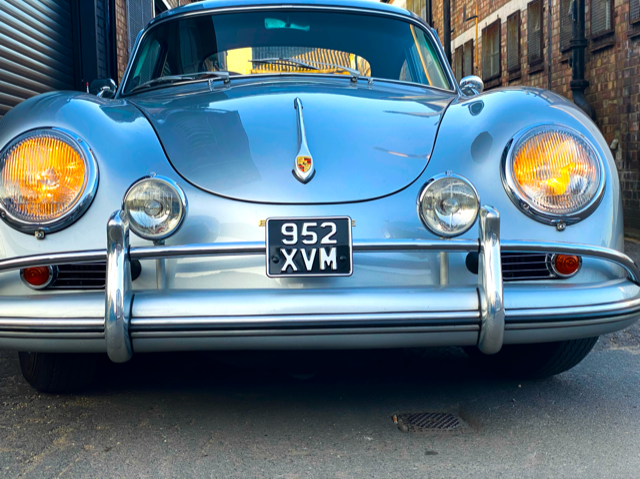 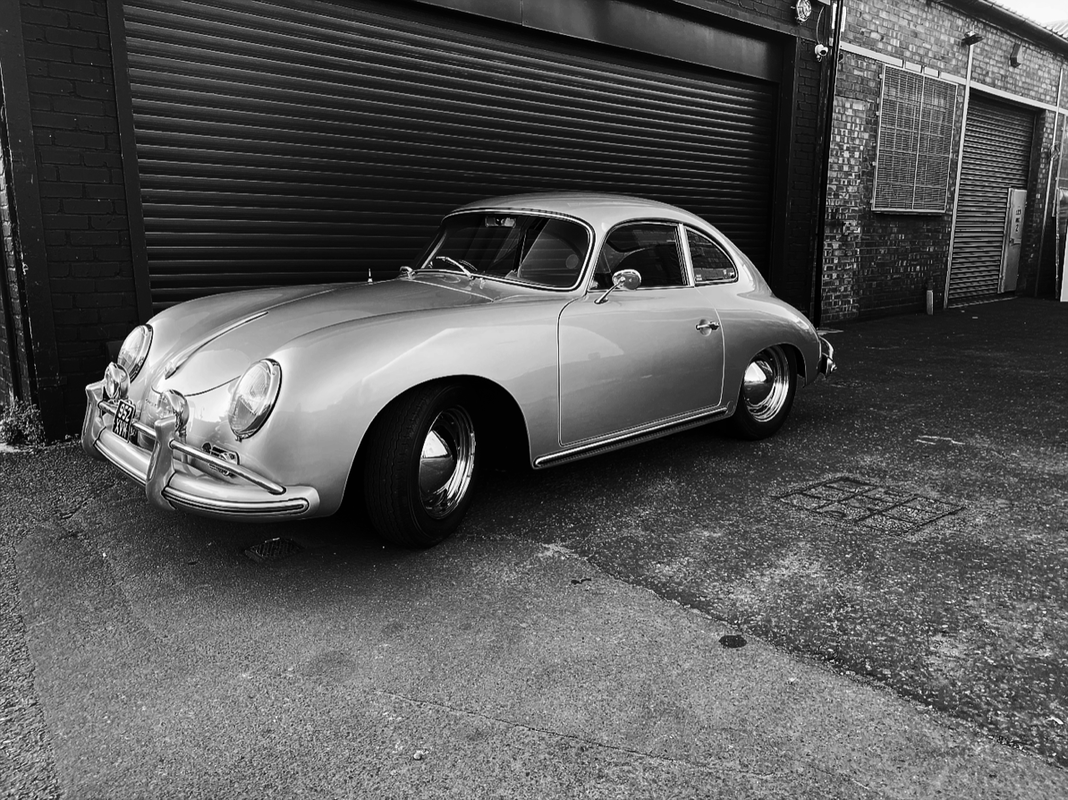 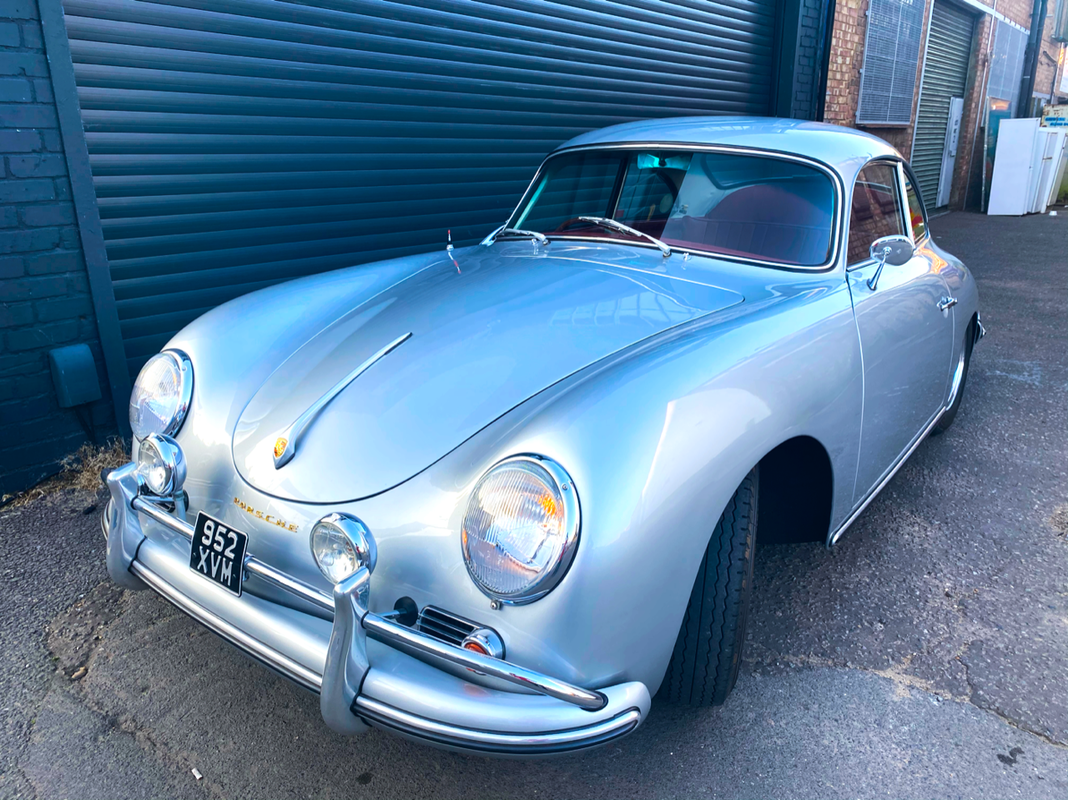 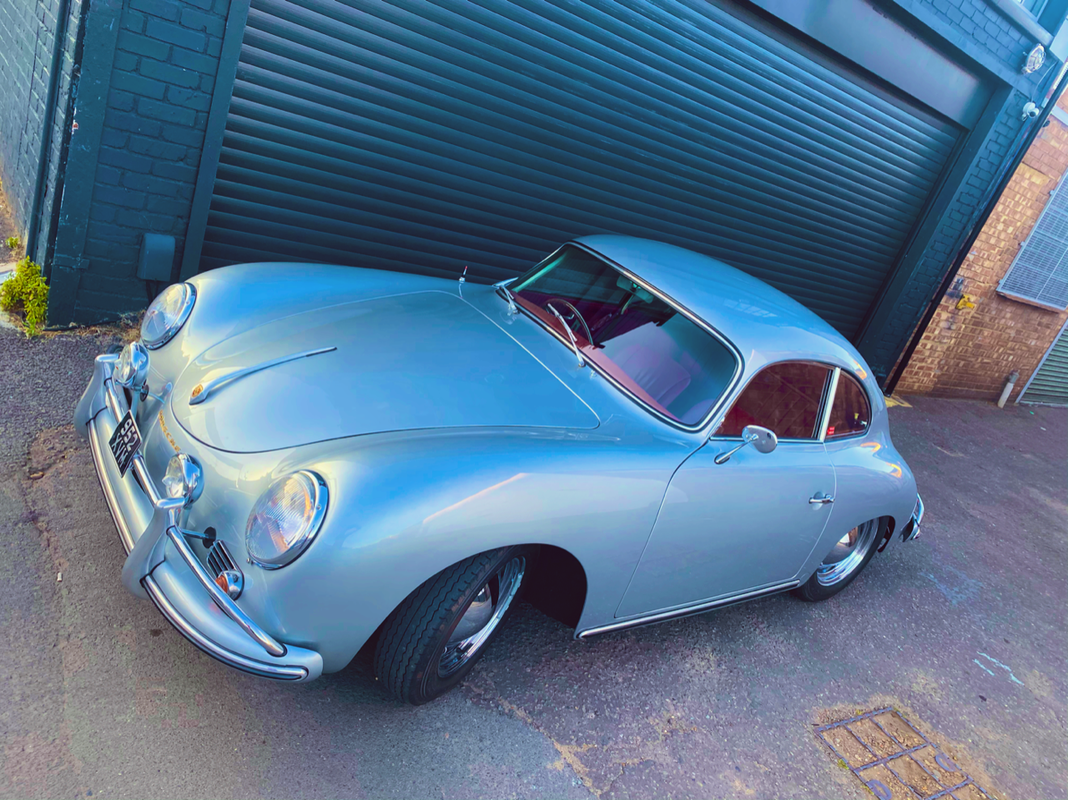 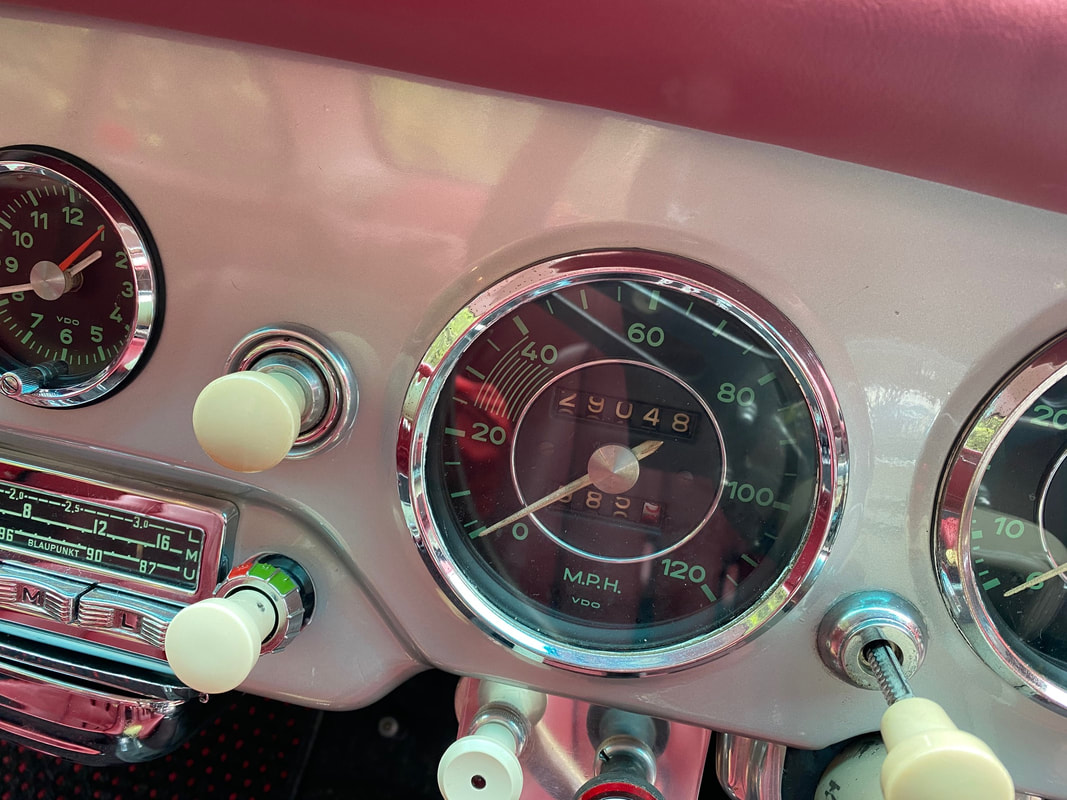