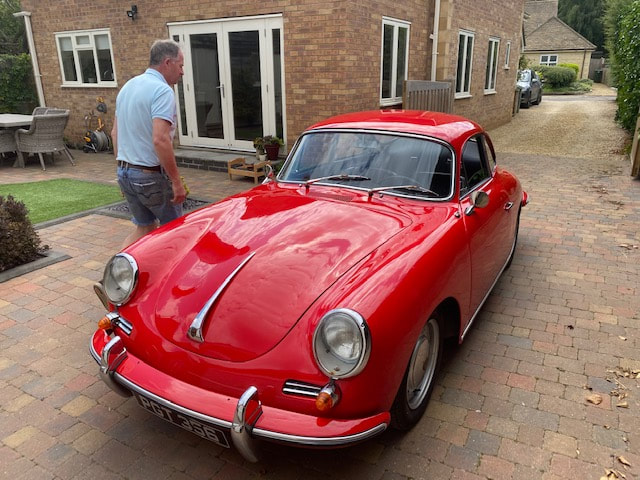 The 356 is a lightweight and nimble-handling, rear-engine, rear-wheel drive, two-door available both in hardtop coupé and open configurations. Engineering innovations continued during the years of manufacture, contributing to its motorsports success and popularity. Production started in 1948 at Gmünd, Austria, where approximately 50 cars were built.

In model year 1964, the 356 C replaced the 356 B. The range of engines was reduced to three and the existing 60 hp variant was discontinued. Instead, the 75 hp engine of the B 1600 Super represented the entry-level engine.

The top-of-the-range engine in the 356 C 2000 GS Carrera delivered a power output of 130 hp.Visually, there was very little difference between the C series and the B series. One striking change was the modified rims with flatter hub caps without Porsche Crest.

The new hub cap design was the result of the fact that all 356 models were now equipped with disc brakes as standard. The B type also featured a round exterior mirror.

All 356 generations were also available in an open-top version (Cabriolet, Speedster or Roadster).

Of the 76,000 originally produced, approximately half survive.

This example is LHD with a 1.6 twin carb, twin grille. It has been given a SC upgrade.

The car has undergone some major works in recent years to the underside, engine, brakes and transmission. Mechanically the car is very strong. The engine was rebuilt in 2019 with balanced and polished cranks with the heads and valves refurbished, new fly wheel and all ancillary parts. Gearbox overhaul including new gear selector, bushes and bracket. New clutch and bearing. New exhaust. Petrol tank deep cleaned. New brake servo.

The panel fit is excellent, but the body needs attention. To be clear, the underside and sills are fine, but both doors and around the A frame need new panels.

This is a former Texas car and therefore when it was imported into the UK in the 80's the body was excellent, but it was left sitting outside for 2 years and this took its toll on the doors especially.

I bought a 356C to use and to not be afraid to park up anywhere. I was therefore not looking for a trailer queen.