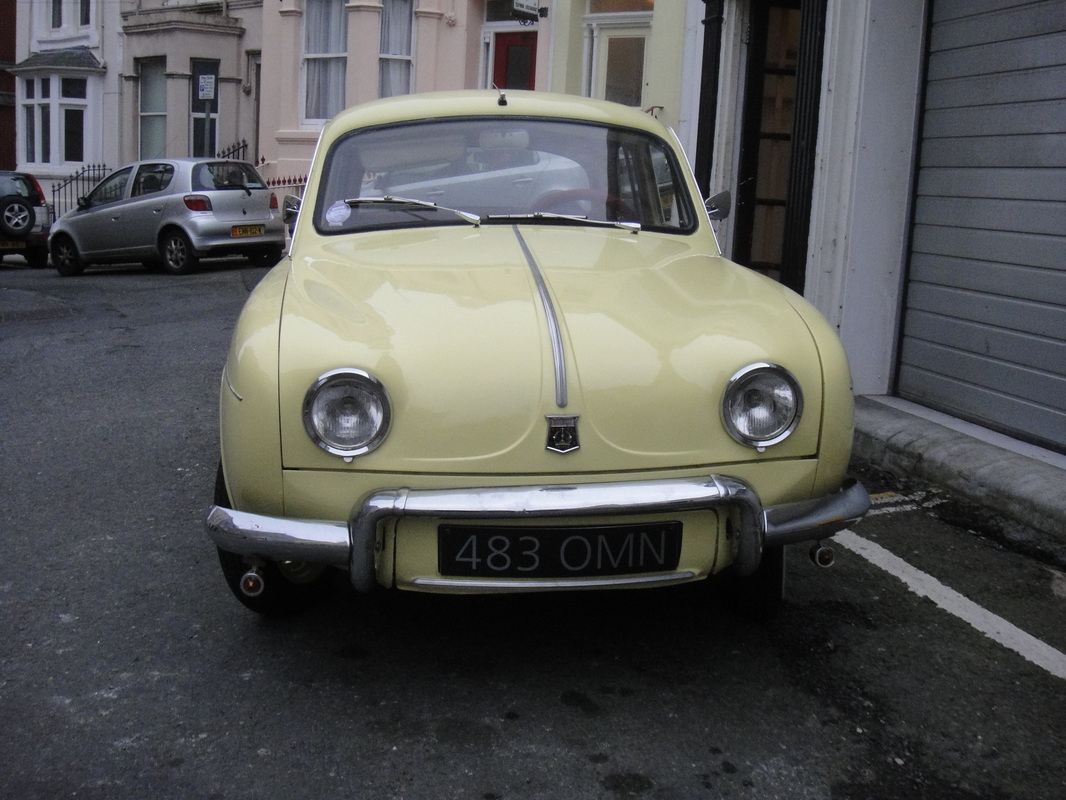 The Renault 4CV is an economy car produced by the French manufacturer Renault from August 1947-July 1961. The first French car to sell over a million units, the 4CV was superseded by the Dauphine.

The 4CV was a four-door sedan of monocoque construction, 3.6 m (11 ft 10 in) in length with front suicide doors and using Renault's Ventoux engine in a rear-engine, rear-wheel drive layout.

The car's name, 4CV, refers to the French abbreviation, CV, for the French equivalent to "horsepower" as a unit of power, translating from cheval vapeur." At the time, a vehicle's horsepower was used as its tax classification, which in the case of the 4CV was four taxable horsepower.

The 4CV was originally conceived and designed covertly by Renault engineers during the World War II German occupation of France, when the manufacturer was under strict orders to design and produce only commercial and military vehicles. Between 1941 and 1944 Renault was placed under the Technical Directorship of a francophile engineer called Wilhelm von Urach (between 1927 and 1940 employed by Daimler Benz) who took care to notice nothing of the small car project. A design team led by the company's Technical Director Fernand Picard, recently returned from Renault's aero-engine division to the auto business and Charles-Edmond Serre, who had been with Renault for longer than virtually anyone else envisioned a small, economical car suitable for the period of austerity which was expected to follow the war.

The 4CV was presented to the public and media at the 1946 Paris motor show and went on sale a year later. Volume production was said to have commenced at the company's Billancourt plant a few weeks before the Paris motor show of October 1947, although the cars were in very short supply for the next year or so.

On the 4CV's launch, it was nicknamed "La motte de beurre" (the lump of butter); this was due to the combination of its shape and the fact that early deliveries all used surplus paint from the German Army vehicles of Rommel's Afrika Korps, which were a sand-yellow color Later it was known affectionately as the "quatre pattes", "four paws". The 4CV was initially powered by a 760 cc rear-mounted four-cylinder engine coupled to a three-speed manual transmission. In 1950, the 760 cc unit was replaced by a 747 cc version of the "Ventoux" engine producing 17 hp (13 kW).

Despite an initial period of uncertainty and poor sales due to the ravaged state of the French economy, the 4CV had sold 37,000 units by mid-1949 and was the most popular car in France. Across the Rhine 1,760 4CVs were sold in West Germany in 1950, accounting for 23% of that country's imported cars, and ranking second only to the Fiat 500  on the list. The car remained in production for more than another decade. Claimed power output increased subsequently to 21 hp (16 kW) as increased fuel octanes allowed for higher compression ratios, which along with the relatively low weight of the car (620 kg (1,400 lb)) enabled the manufacturers to report an 0–90 km/h (0–56 mph) time of 38 seconds and a top speed barely under 100 km/h (62 mph). The engine was notable also for its elasticity, the second and top gear both being usable for speeds between 5 and 100 km/h (3 and 62 mph); the absence of synchromesh on first gear would presumably have discouraged use of the bottom gear except when starting from rest

This car is very original and has not undergone much in the way of any restoration, consequently it’s in a very useable condition and you should not be afraid to use this car everyday. You can get every part for this car and they a dirt cheap. I personally have the Renault UK club order all my spares. Any mechanic can repair anything on these cars as no special tools are required. I have done all the maintenance myself as they are so easy to work on.

These cars are still modestly priced, especially when you consider the higher prices commanded by the Fiat 500. I also think that this car is easy to live with and more civilised to drive. I have been out with 4 people in this car and it’s just pure fun.

Early Renaults had a bad rep, largely because you could literally hear them rusting away. However this car has no rust when I acquired it having languished in Southern France, and it has now been adequately rust-proofed, which means it will last linger than any modern car on the road.