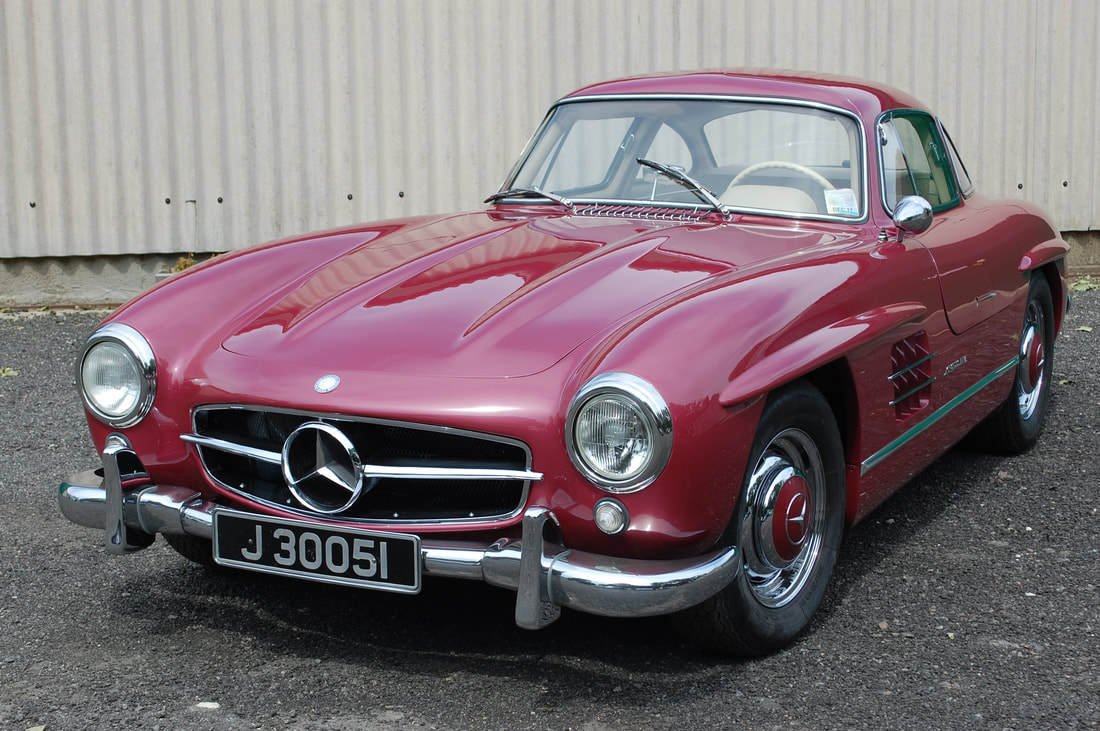 As a background, the leading company in the building of replica 300 SL Gullwings in the late 20th century was California based Gullwings Inc, owned by Anton Oestermeier, during the course of their limited production 50 Gullwing replicas were produced based on the six cylinder Mercedes R107 280 SL engine or the 500SL V8, an original Gullwings Inc. brochure is included in the history file which detail this model type.This replica of a classic Mercedes Gullwing, it's historically very important.

In brief, between 1989 and 1993 a former Mercedes technician, Anton Oestermeier operated a California based workshop (Gullwings Inc) that built near-perfect recreations using moulds from the original cars and using many of the original parts. Anton built 50 Gullwings before the workshop stopped operating. The Ostermeier cars are the only Gullwing replicas available in the world that were built before Mercedes-Benz Company, trademarked the shape of the 300 SL.

These 50 cars were so well made they were typically bought by people who already owned an original, but the replicas had far better road manners and were truly useable.

The rarity of these replica cars by Anton Oestermeier has created its own rarity premium and they are now highly collectible. I have personally been trying to buy one for about 10 years, but they almost never come on the market and when they do they sell instantly with values about 25% of their original counterparts.

My Gullwing is in fact the last car made, which adds to it's value and it was also built on a later chassis with an upgraded engine.

What really makes this car special is it was the subject of a German court case about 3 years ago when Mercedes literally removed the car from a car show in Essen with a court order claiming the car was a breach of copyright. The owner (from whom I bought the car) spent over £300k litigating against Mercedes in the German courts and won. The defendant was able to produce documents showing that Mercedes were complicit and in fact had cooperated with the construction of the Oestermeier cars. Therefore, the Oestermeier cars are the only legitimate replicas that can ever exist as all others are illegal and will be destroyed (which has happened).

This car was conceived in the late 1980’s as a private project for the owner, Seigneur of St John in Jersey, Mr John Dick (the owner of Hooper & Company), bought it to accompany his original Gullwing which he considered too fragile and impractical to use for continental touring.

His vision was to create a better driving car than Oestermeier initially produced utilising the Mercedes 300 CE / SL 24 valve engine, with AMG  upgrades. The plan by the commissioning owner called for the production of a ‘ true recreation’ utilising original 300 SL Gullwing components for the interior and controls with uprated running gear, a five speed Getrag gearbox, all then incorporated within a Gullwings Inc frame and GLARE aluminium body.

The Oestermeier cars are collectable in their own right, but this particular car is one of only three that was fitted with the AMG upgrades making it super collectable.

The car was therefore produced in the US by Gullwings Inc, and then shipped to Europe for the specialist build of the engine, with mechanical refinements top the suspension based on Mercedes W129 running gear, an uprated Getrag five speed gearbox, ABS braking system, emergency brakes, all important air conditioning, and a modern sound system built into period casings. The detail of the car included original instrumentation, steering wheel, controls, hand-made fitted luggage to the original pattern, and many other beneath the skin enhancements. The final colour being decided on, was an original option, being strawberry red metallic, as chosen by Grace Kelly, Princess Grace of Monaco.

All of this is detailed in the detailed history file, including the budgets, payments and work outsourced to specialists in the US and UK, together with correspondence on the enhancements made to the car to the much higher specification of the first owner.

The project was delivered through Hooper & Co (Coachbuilders) who project managed the build, and the car is shown on the certificate of origin as being supplied to them, the initial stages of the project were finalised in the 1990s and the car was subsequently displayed at the Techno-Classico Essen show in the late 90s after being evaluated by Mercedes Benz, and photographed in their studios.

The extensive history file includes a full breakdown of cost in the late 1980’s estimated to be in excess of £175,000, together with US Certificate of Origin from Gullwings Inc., German import documentation, Jersey registration documents, and the specification, together with the original hand written notes and correspondence relating to the construction of the car.

Condition Report Overall
In excellent showroom condition, limited use over the last 27 years, recently recommissioned after a period of storage. Now ready for long distance touring and rallys.

Engine and Mechanicals
In excellent condition, see introduction, the engine is believed to develop some 285 bhp. The car has been recently serviced in our workshops with new Michelin XWX tyres fitted.

Mercedes-Benz turned the automotive world on its head when the astonishing 300SL Coupe made its debut at the 1954 New York International Auto Show. A technological tour de force, the 300SL had a tubular spaceframe chassis, independent suspension, and a 3-liter inline-six with dry-sump lubrication fed by Bosch mechanical fuel injection. Wrapping the spaceframe was a taut, curvaceous two-seat coupe body shell derived from the W194 racing sports cars. The high sides of the frame led to the ingenious top-hinged doors, that when open resembled a bird's wings – and thus the "Gullwing" moniker was born. Mercedes-Benz built 1,400 coupes and just over 1,800 roadsters in the car's nine-year production run, and today, no significant collection is complete without an example of this post-war masterpiece.
​
If you fancy the real thing in this colour combination, you will need to find $1.435k plus fees....

The value of original 300SLs reflects its status as a benchmark, "blue-chip" collectible. Upwards of seven-figure values are the norms, and concours restorations can easily top a half-million dollars. As the 300SL slipped out of reach for the average enthusiast, the market for replicas and recreations grew accordingly. In the 1980s, a 300SL owner and former Mercedes-Benz employee named Anton "Tony" Ostermeier founded Gullwing International Cars to take the concept of a "replica" 300SL to another plane, designing a ground-up, exacting recreation worthy of sharing the spotlight with the legendary original.

Ostermeier cut no corners developing his Gullwing tribute, using the finest components and materials available. The bespoke square-tube chassis is crafted in the same manner as the original. Keeping it "in the family," the car is built around contemporary Mercedes-Benz W124 engines. The body is measured against factory bucks and made with an aircraft-derived material that bonds fiberglass to a thin outer layer of aluminum. The process ensures precise accuracy, and a nearly flawless outer surface with better consistency and finish quality than traditional fiberglass. Many of the trim parts, instruments, and other details are so accurate that owners of original cars began using them on restoration projects, and even marque experts are hard-pressed to tell the difference between an Ostermeier and the real thing at first glance. These hand-built cars took over 400 hours each to build, and much like a Lynx D-Type Jaguar or Glenn Pray Auburn, the cars of Tony Ostermeier's Gullwing International are highly desirable and considered genuine collectibles in their own right.
​

It is very well-documented, with a history file including the original sales invoice, Certificate of Origin, specification sheets, and sales literature.

By all accounts it has enjoyed a life of light use, and is in superb condition. The body is excellent, exhibiting precise panel gaps, and good-quality plating on the trim. The factory-style painted wheels wear authentic chrome hub caps and new, period-style radials.

Raising the signature top-hinged doors reveals the beautiful, hand-stitched leather cockpit. Anyone who has driven a 1950s Gullwing will feel instantly at home in this car. The leather seats are crafted in the same manner as the originals, with sills trimmed in matching leather, and correct square weave carpet lines the floors. Instrumentation and switchgear are original and not reproductions (like other Ostermeier Gullwings).

This car features a period-correct steering wheel that tilts for easy ingress/egress. Air conditioning is a welcome modern accommodation, as is a neatly integrated stereo. A fitted two-piece luggage set nestles behind the seats, and there is a modest sized boot to accommodate all you'd need on a continental tour.

Mechanically, the car consists of nearly all off-the-shelf Mercedes Benz components, starting with the virtually-bulletproof M104.983 shared with the W124 300E. The inline six-cylinder unit retains the factory fuel injection and engine management, and the power goes through a 5-speed manual gearbox and on to a Mercedes rear axle. Parts are readily available, and any experienced Mercedes technician will feel right at home under the hood. The engine is clean and tidy, appearing well-maintained and reflective of the low mileage. Disc brakes are at all four corners, and the Mercedes-derived suspension is specially tuned for balanced handling and ride quality. These are superb cars to drive, and their quality is apparent from the first turn of the key.

With reliable, proven mechanical components, this is a superb automobile for long-distance touring or for merely savouring your favorite driving roads in the spirit of the original 300SL. With only 50 or so examples produced, Ostermeier Gullwings are extremely rare and seldom available on the open market. This excellent example is beautifully maintained and unique in so many ways.

Another unique and historically important feature of this car is it took the might Mercedes-Benz and won.

In 2016, lawyers representing Mercedes-Benz literally removed this car from a stand at the Essen car show with a court order claiming the car was a breach of copyright. The owner (from whom I bought the car) spent over £300k litigating against Mercedes in the German courts and won. The defendant was able to produce documents showing that Mercedes were complicit and in fact had cooperated with the construction of the Oestermeier cars. Therefore, the Oestermeier cars are the only legitimate replicas that can ever exist as all others are illegal and will be destroyed (which has happened).

​Mercedes-Benz had to refund all legal fees and court costs and pay for repatriation of the car to the owner.

Ultimately, this Gullwing is one of only 50 that can legitimately exist and although other replicas have and will be built they are all vulnerable to possible destruction and litigation. 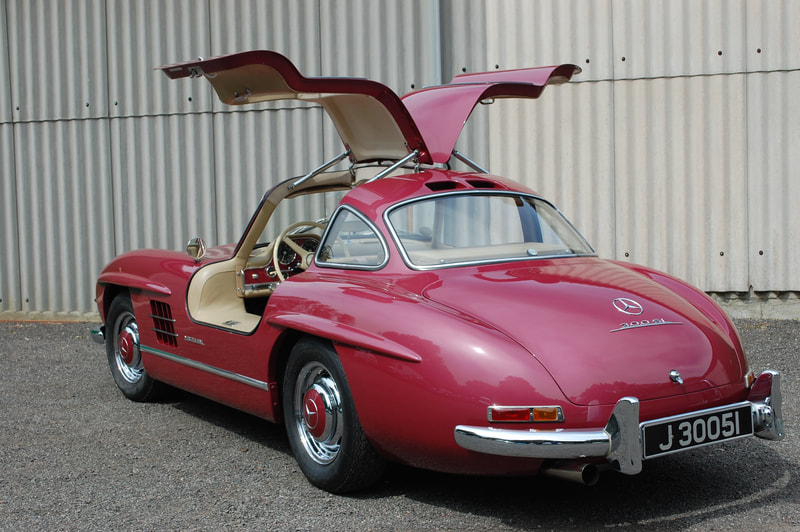 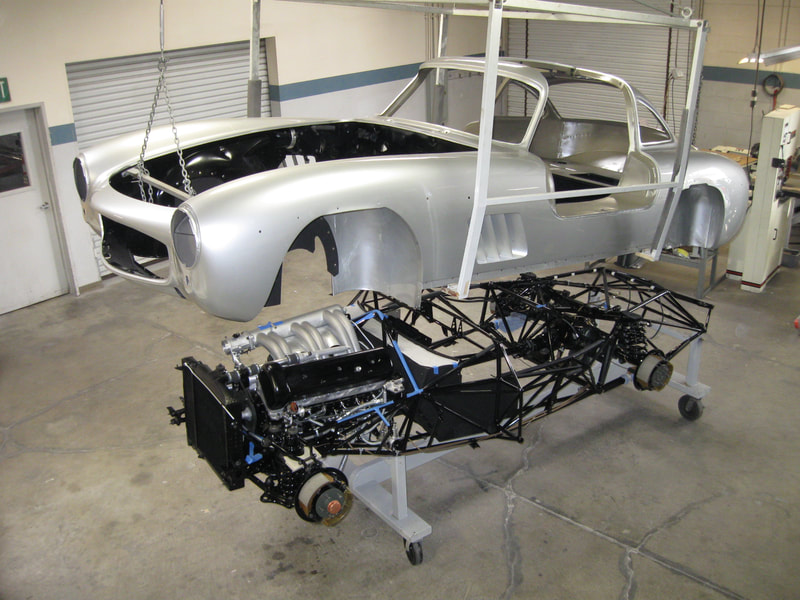 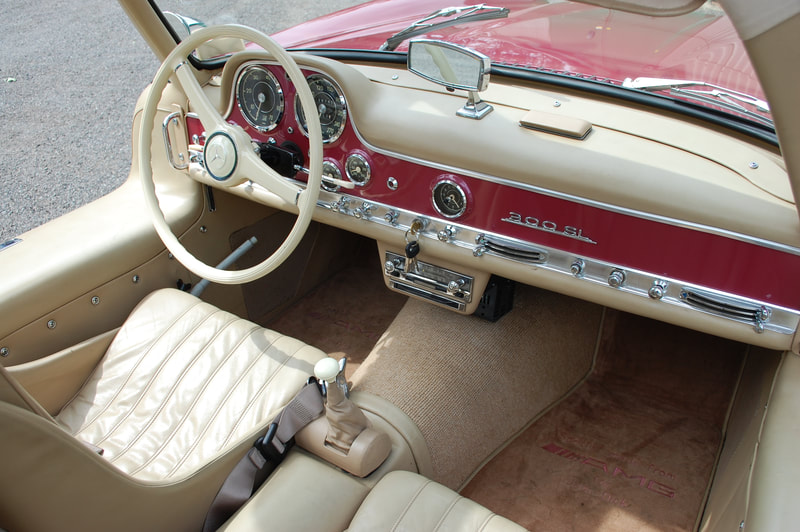 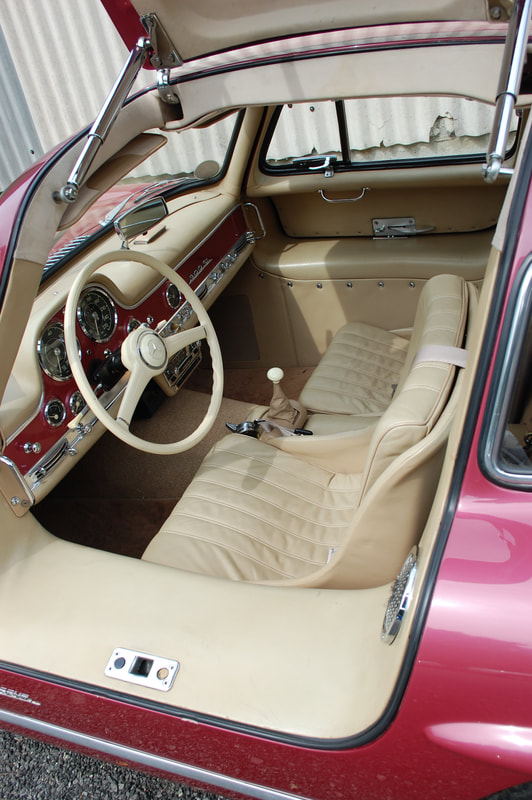 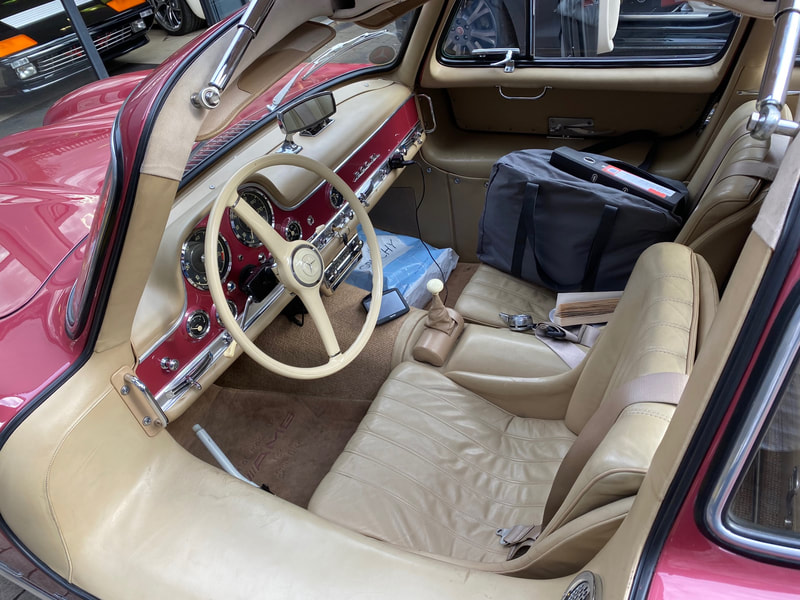 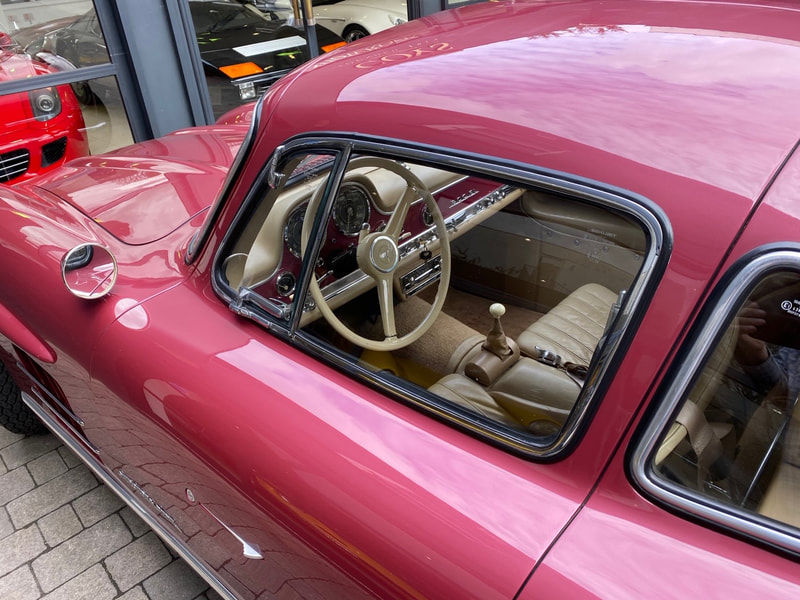 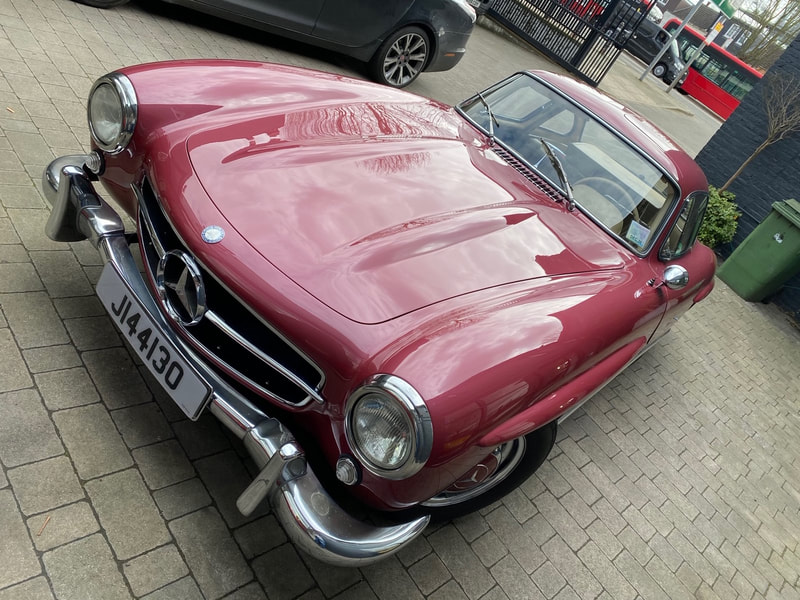 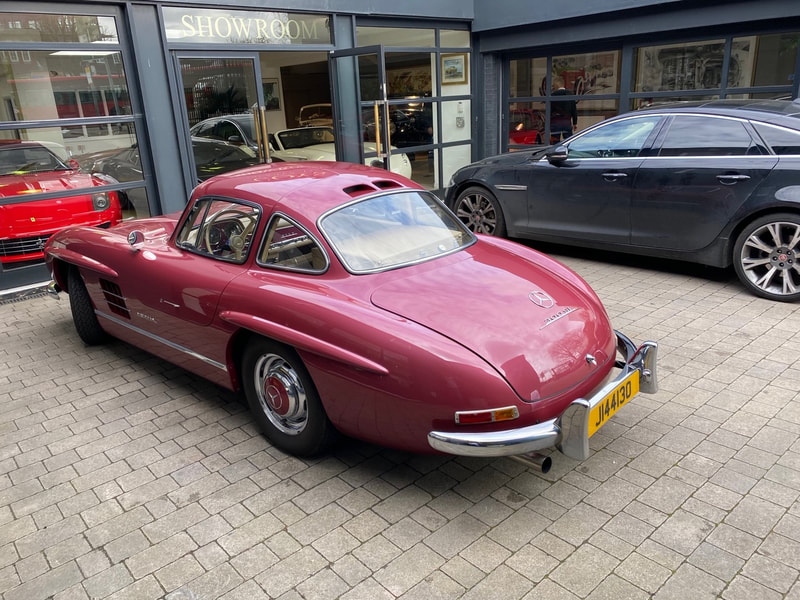 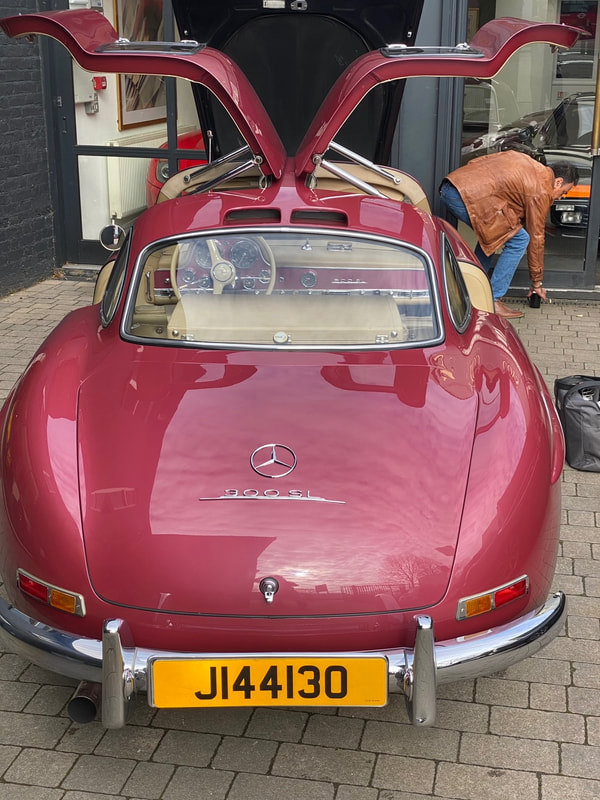 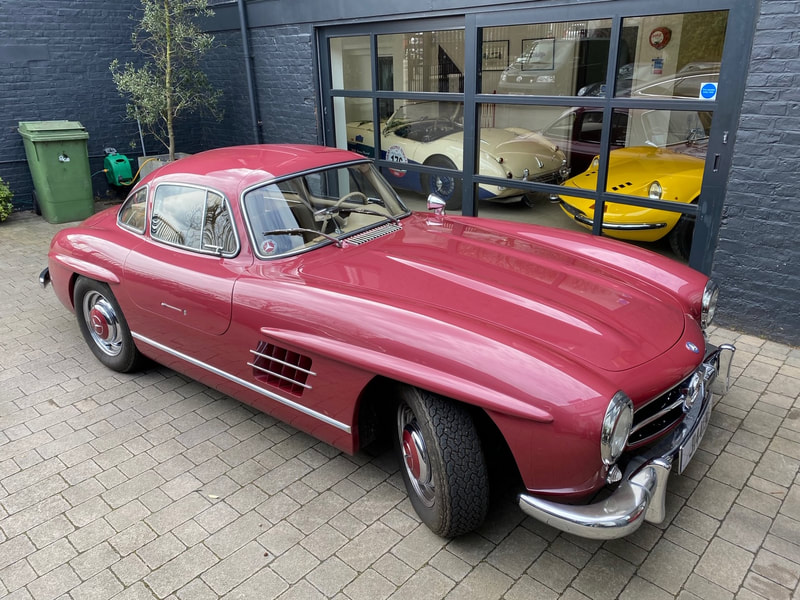 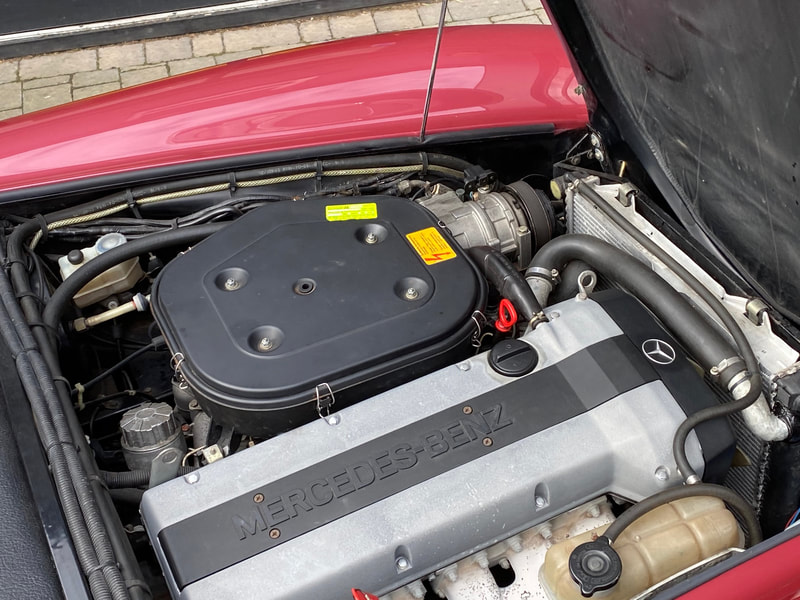 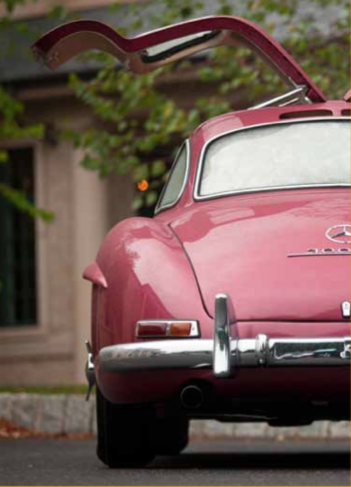 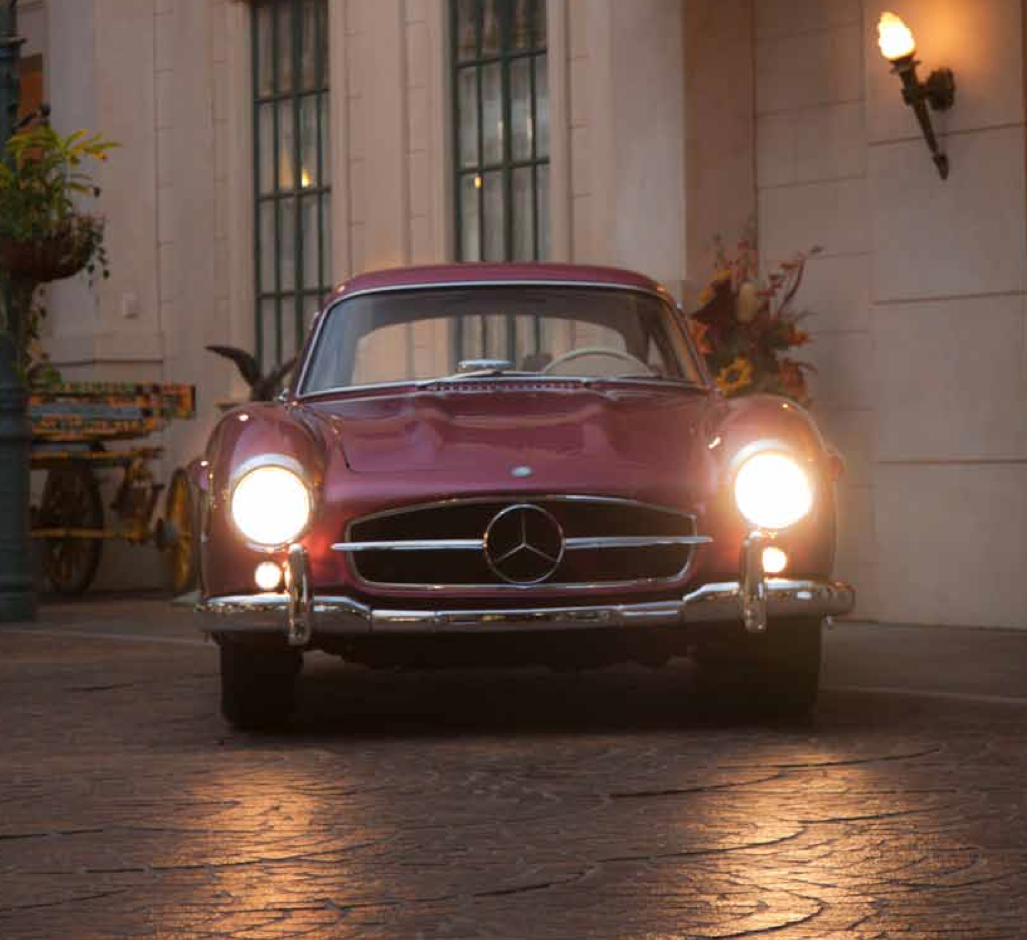 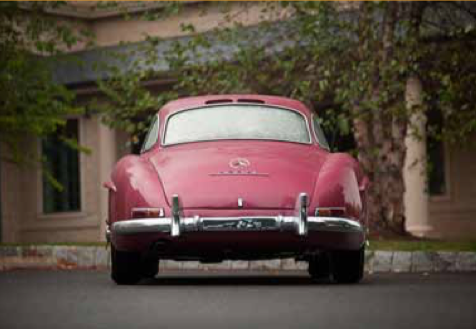 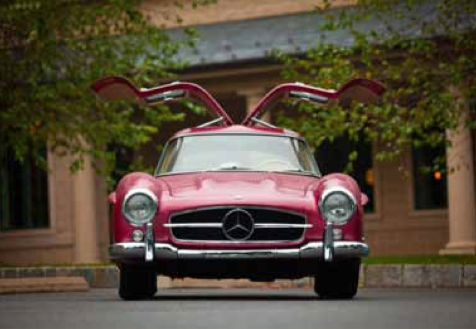 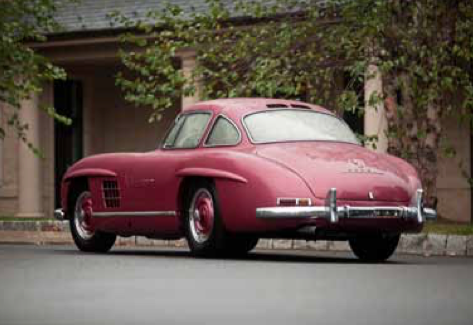 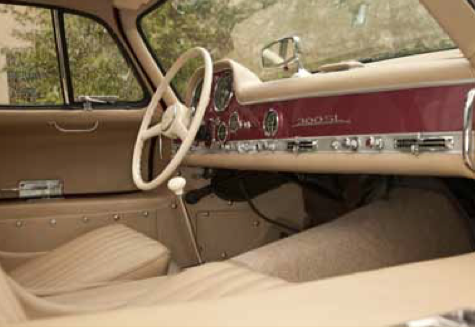 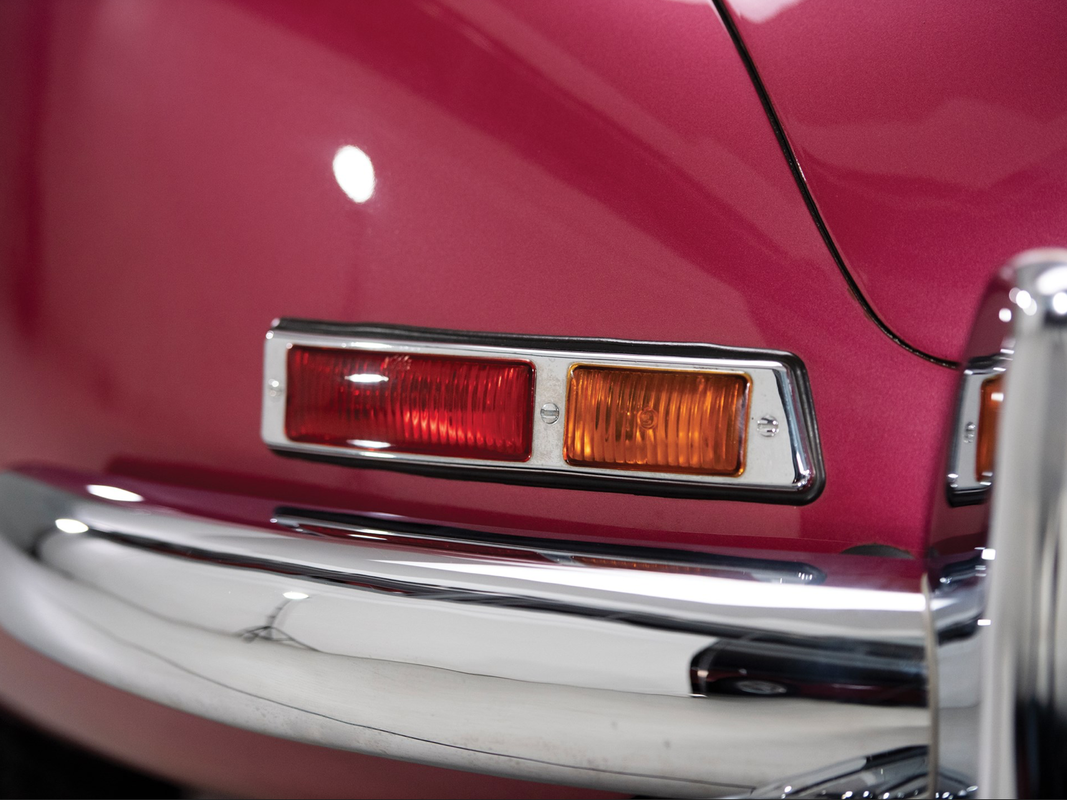 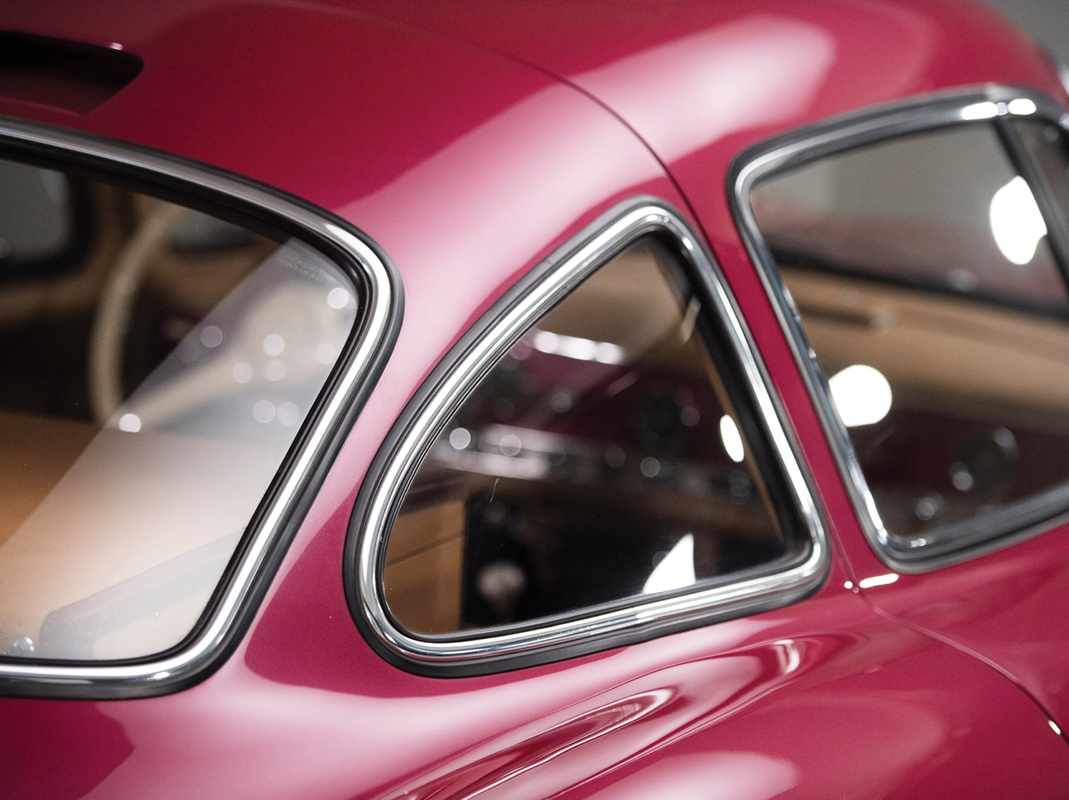 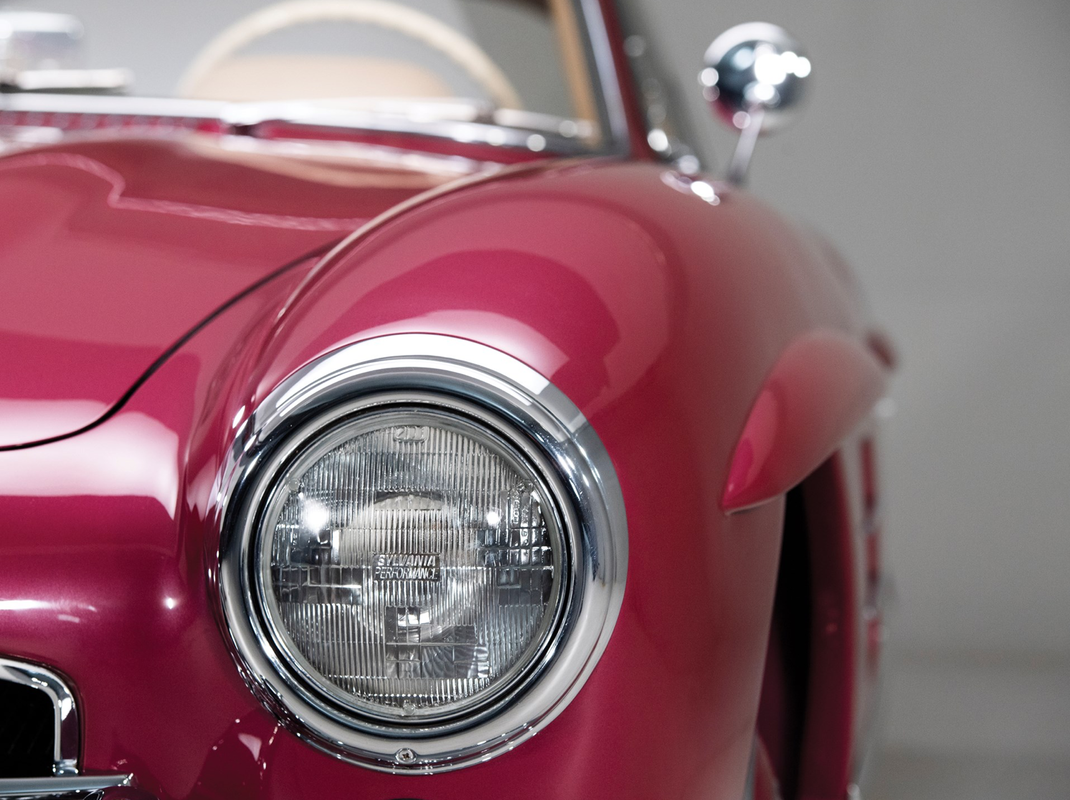 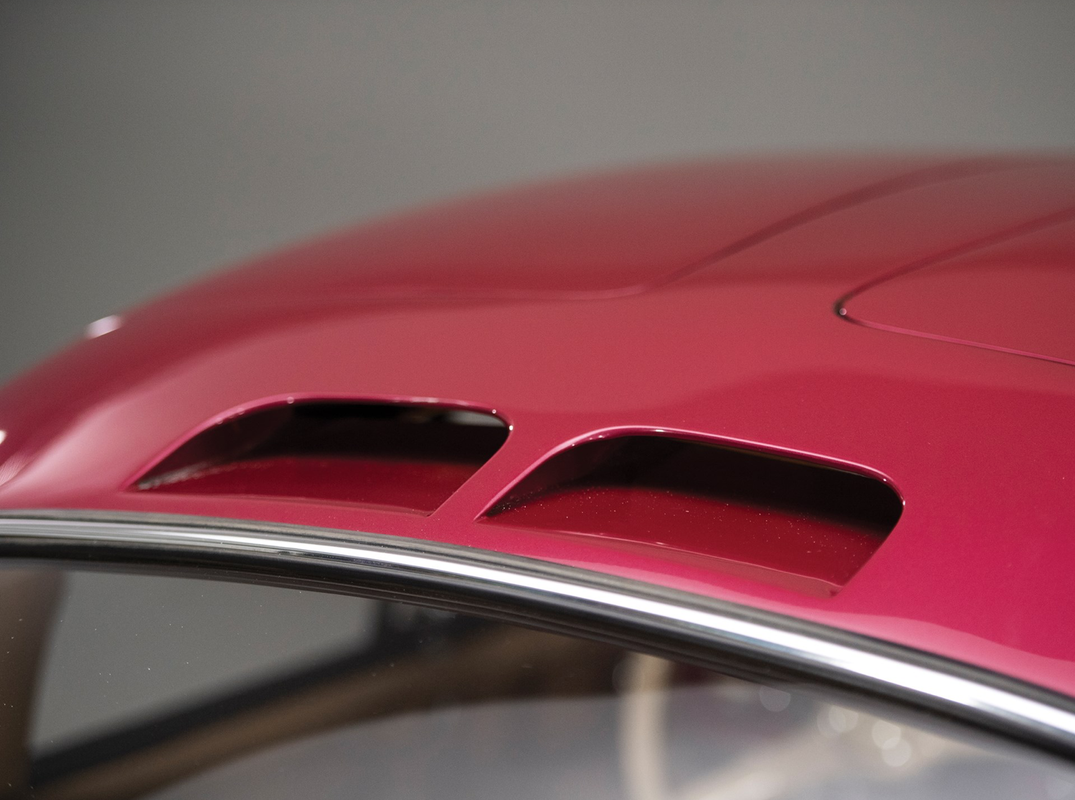 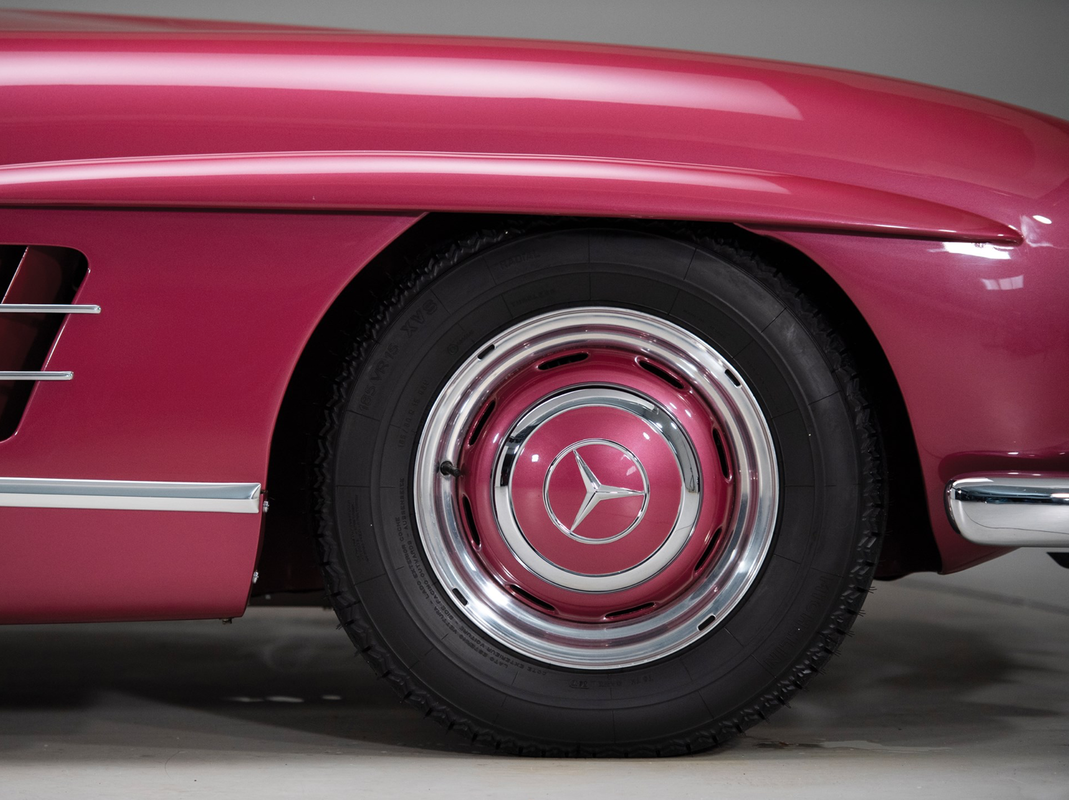 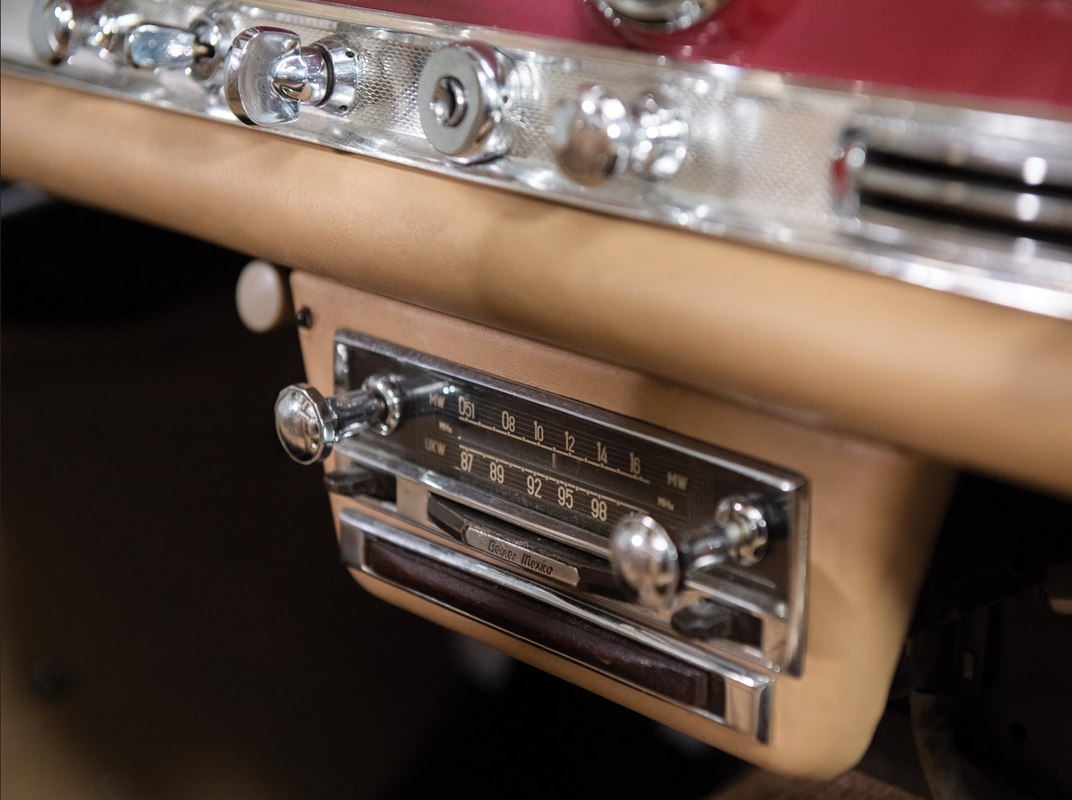 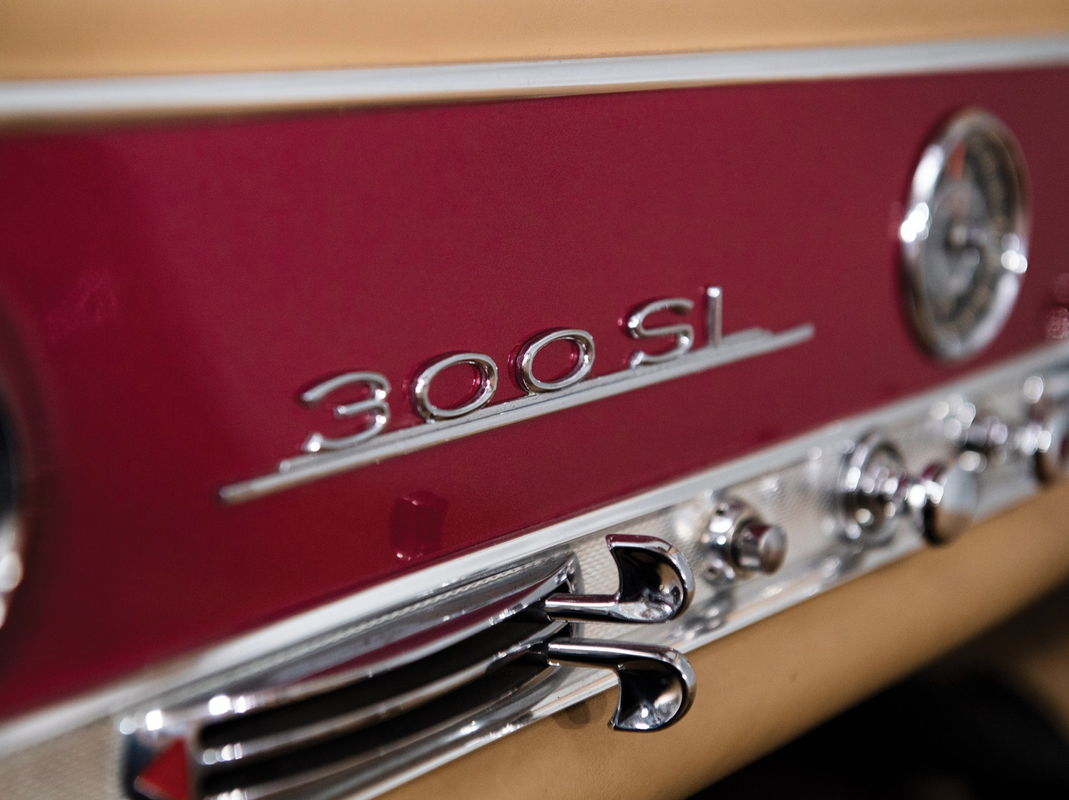 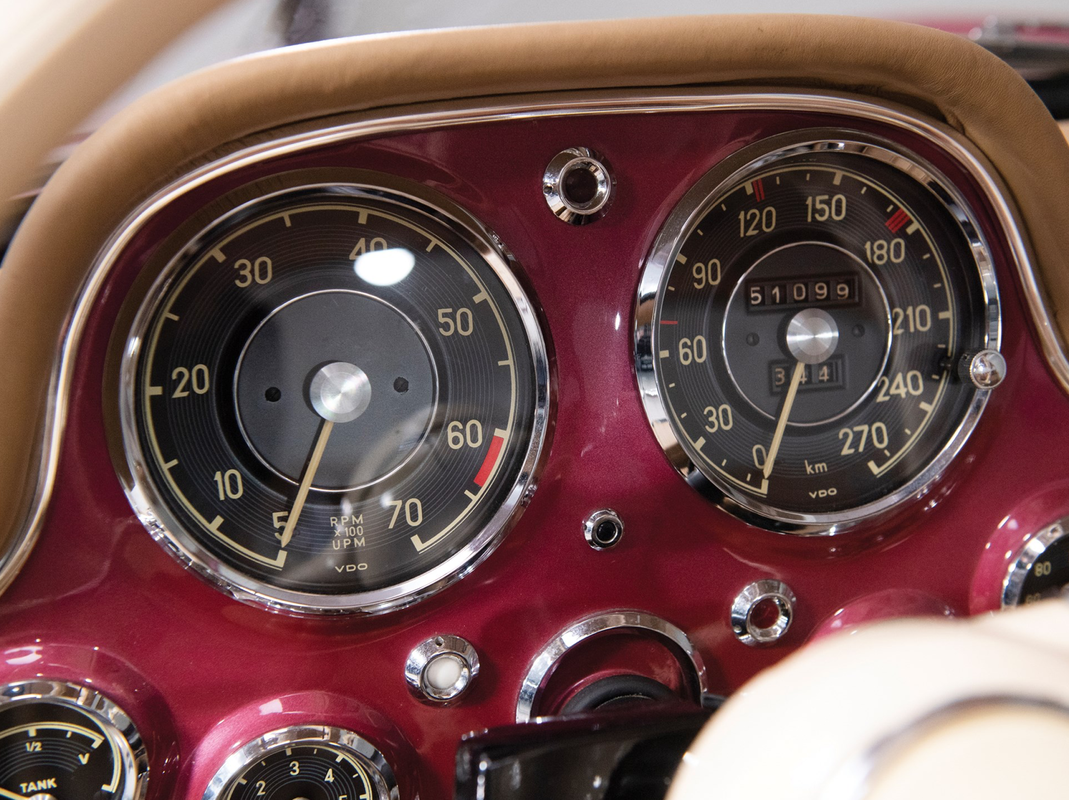 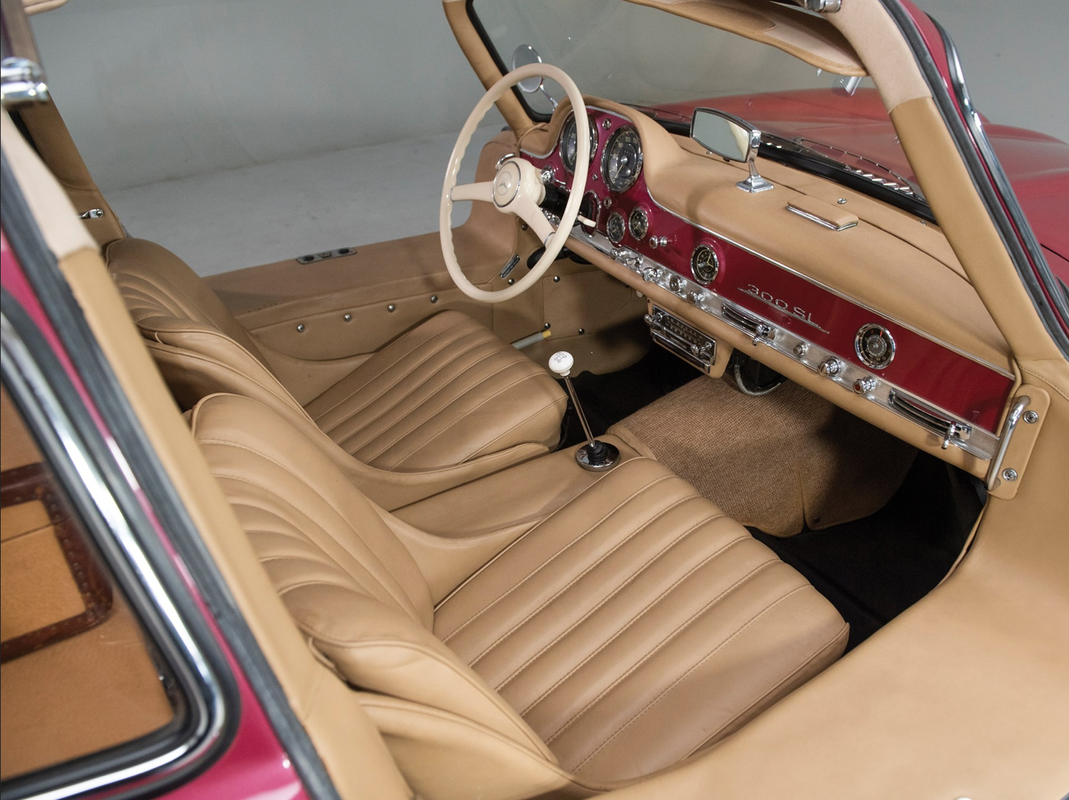 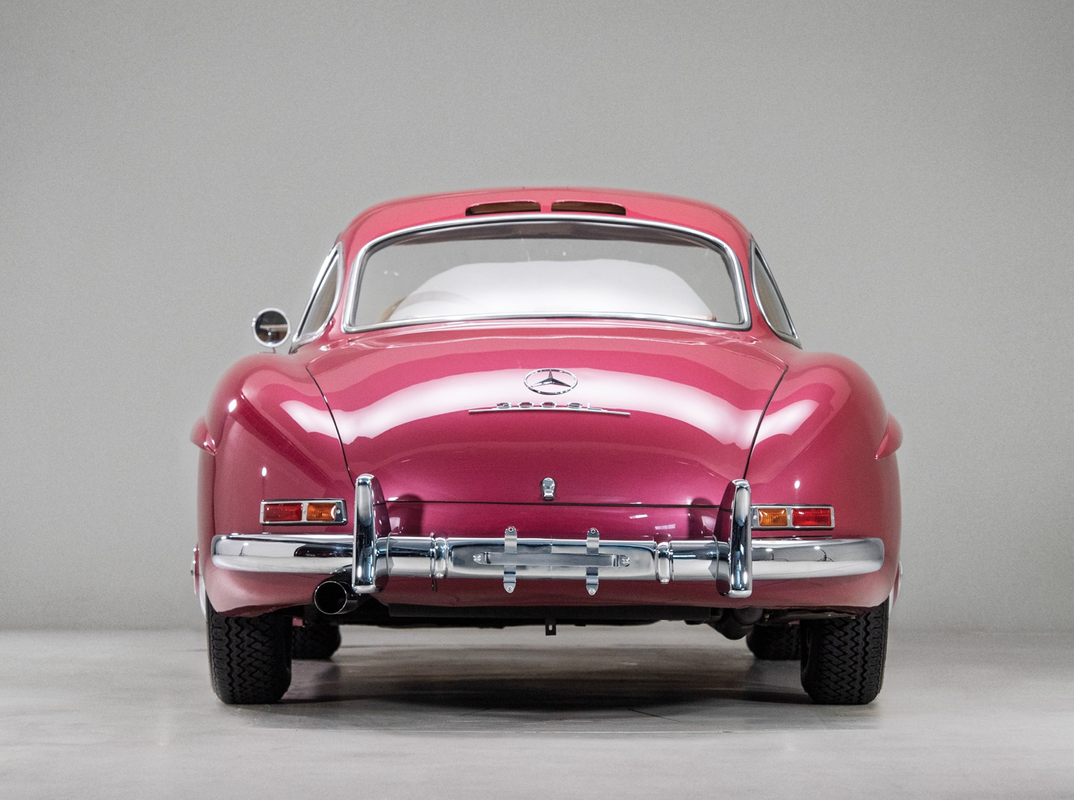 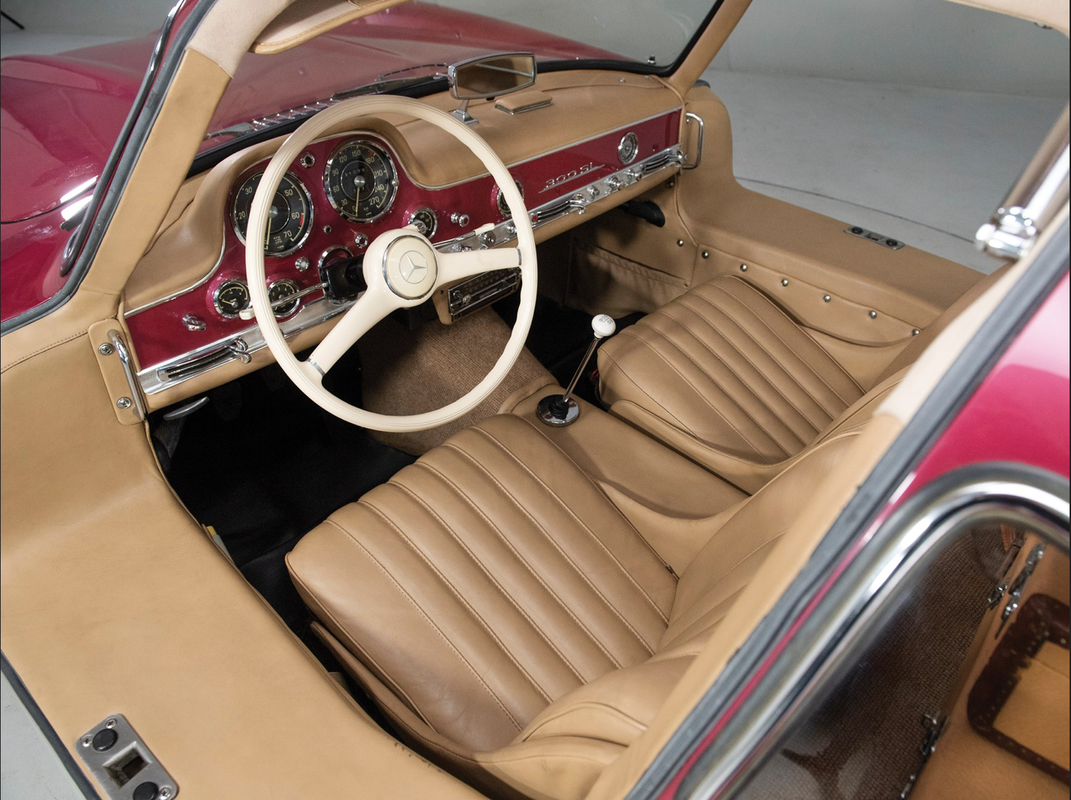 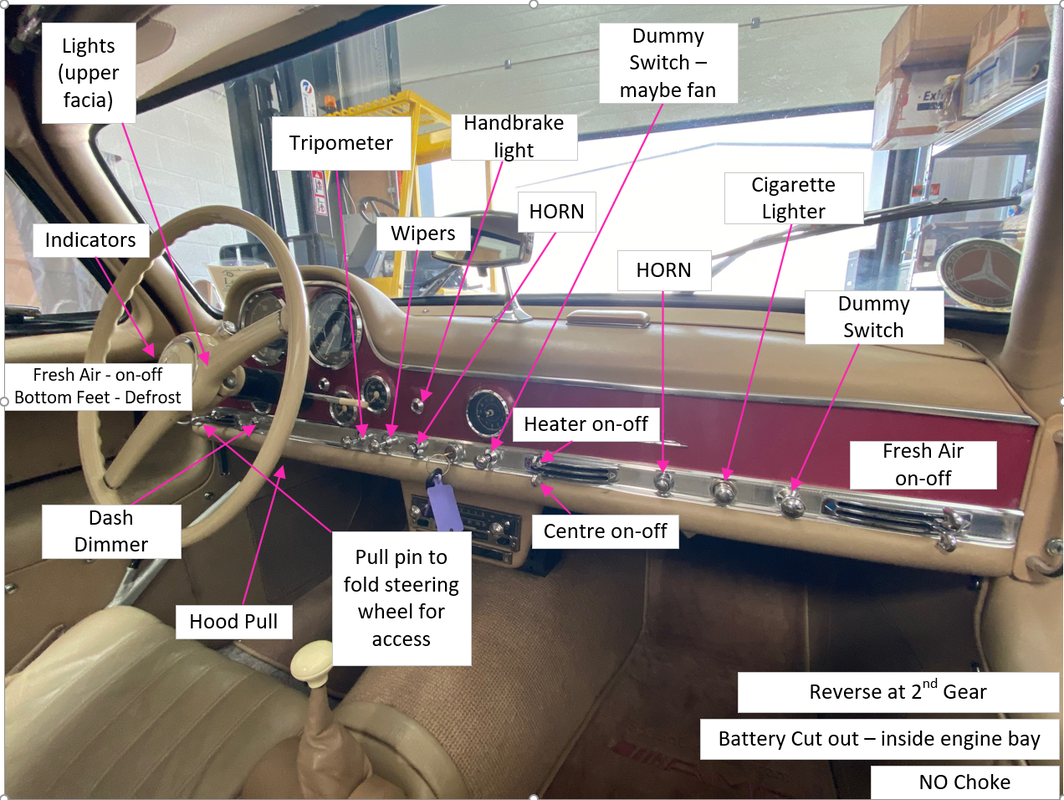 The car has quarter-light windows which work really well, but if you don't want to use the air conditioning, then you can remove the side windows to keep cool. Simply pull the chrome catch and the whole side glass can be removed.

You may want to consider converting the wheels over to Rudge wheels, which would have been fitted to the race cars.

A company is Austria makes the wheels: ​https://www.germanrudgewheels.com/mercedes/